Belizeans are urged not to go to either Guatemala or Mexico; it is too dangerous 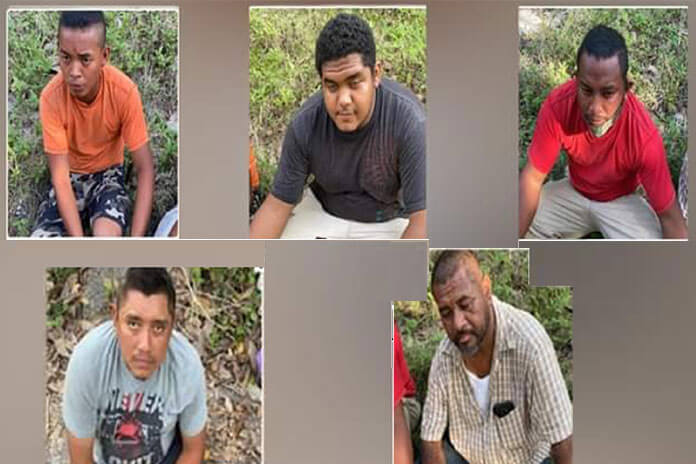 CALLA CREEK, Cayo District. Fri. May 15. 2020– At about 4:30 yesterday evening, five Belizeans from Calla Creek, Cayo District, were found crossing into Belize illegally from Guatemala, through one of the many back roads along the porous borders between the two countries, in the Cayo District.

The men went into Melchor, Guatemala, to buy cheap beer and were returning when they were busted with 3 cases of Corona beer and some other types of beer in bags they were carrying.

The men are now facing a mandatory 3-month jail sentence and a $5,000 fine for breaching COVID-19 Safety Regulations. In addition, they could be fined an additional $20,000 for possession of un-customed goods and also $1,000 for illegal entry, since the borders are closed.

They have been charged with illegal entry, violation of COVID-19 Safety Regulations, and possession of contraband goods.

Commissioner Williams said that if the results of the test are positive, the men will be handed over to the Ministry of Health, who will proceed to deal with the men according to the protocol for handling COVID-19 patients.

Police said that at about 4:30 yesterday evening, they were conducting patrols in the back roads along the Belize-Guatemala border in Calla Creek and saw the five men walking on one of the back roads, going towards the village on the Belize side.

The five men were stopped and questioned. Police established that they were Belizeans and took them into custody.

Presently, Belize is riding a good wave in its fight against COVID-19, with no new positive cases being reported for the past 30 days, making Belize 1 of only 12 nations in the world that are free of the virus.  This announcement was made by Prime Minister Dean Barrow yesterday during a virtual address to the nation.

However, this COVID-free status can be short-lived because neighboring Guatemala and Mexico have a high number of cases of COVID-19 infections.

Mexico reported that there are 42,595 positive cases in the country, and 4,477 persons have died due to COVID-19 complications, and a new record of 2,409 persons tested positive yesterday.

People crossing into our nation illegally can unknowingly bring the virus with them and cause it to spread in our communities, which can result in a resurgence of COVID-19 in Belize, which would be devastating for the nation.

Belizeans are urged not to go to Mexico or Guatemala, and to report anyone seen crossing illegally into the country, and do all they can to protect themselves and the nation from the dreaded COVID-19 virus.

Members of the public are currently required by law to wear a mask on their faces and to practice social distancing as part of the fight against the spread of COVID-19.