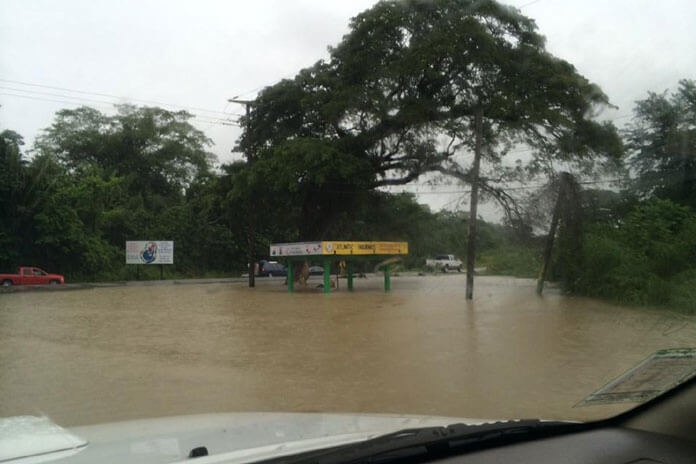 The weather system dumped around 10 inches of rains on Belize that resulted in flash flooding, according to a flood report issued today by the Belize Government Hydrological Service. Amanda reportedly killed 15 people in Central America.

In Belize, the Hydrological Service reported that the flood levels of the Rio Hondo have exceeded the historical levels recorded for Hurricane Mitch. While the New River continues to rise, the waters remain below the river banks.

On the Macal River, the reservoir levels remain below the spillways at the Chalillo, Mollejon and Vaca dams, the report said.

Flood waters in San Ignacio remain below the low level bridge but are gradually rising.

“The Mopan River at Benque Viejo Town has exceeded its banks and continues to rise. On the Belize River, levels at Banana Bank have crested at a high of 3.89 and is falling. The Crooked Tree Lagoon is below the causeway and rising. At Double Run, levels are steadily rising. On the Haulover Creek near Chetumal Street Bridge in Belize City, levels are normal and steady. On the Burdon Canal, normal and steady levels exist. REGION 11: The Sibun River near Freetown Sibun is flooded and has exceeded its banks,” said the flood report.

The report added that the Coastal Road and the bridge near La Democracia are impassable due to flood waters, but the flood levels are steady in the Southern Lagoon near Gales Point Village. The levels of water of the Sittee River at the Kendal Bridge on the Southern Highway remain steady, and the levels of the Rio Grande, and the Temash River near Crique Sarco remain steady.