Flashback on the birth of semipro league football in Belize 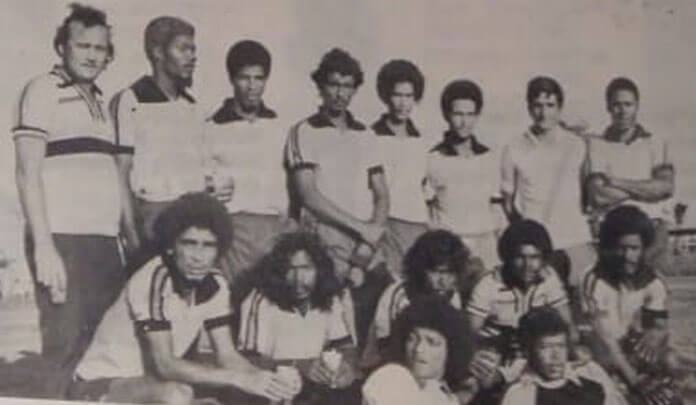 BELIZE CITY, Thurs. Apr. 23, 2020– With no sports occurring during this COVID-19 induced State of Emergency, we find ourselves indulging in the luxury of reflection. And among our unpublished material we came across something we think worth recording. I had briefly coached a Kremandala Lake semipro football team back in 2005, and their star strikers then were a young Deon McCaulay, his dad David “Manu” McCaulay and one Dion “Pussy” Flowers. The major part of the below article was done at the time stated, February 2, 2012; but it was not completed, and with newspaper deadline pressures and so much sports to cover, it somehow, like some other material, got left by the wayside. Now, with some time on my hands, after considerable effort researching old notes and records, I managed to wrap up the story yesterday. Actually, it is a brief sketch of what could be a whole book to chronicle the development of semi-professional football in Belize.

BELIZE CITY, Thurs. Feb. 2, 2012– This morning, former Kremandala Lake striker Dion “Pussy” Flowers asked me about the details of how the first semipro football league got started in Belize. He said he had only heard a few things here and there, but he didn’t know much, and would like to find out.

It made me reflect a bit. Pussy could not have been more than 10 or 11 when the Semipro League was launched in 1991.

I recall an email response from the FFB in February, 2010, to a question from our sports desk at Amandala on the age category of the players in the Central American and Caribbean Games tournament of 2010, to which the FFB replied that “the CAC Games is for players born 1989 in the male category. The Female is open age.”

At the time of that correspondence, these were my reflections:

“1989 is a particularly special year in our football memory; it is also the year when KREM Radio was born. But the youths who will be representing us internationally in a few weeks time were just being born back then. It was the year when the wheels really started turning that would culminate in the first semiprofessional football league being born in Belize in early 1991.

“April, 1989 – Coke Milpros makes history for Belize, winning through a round of CONCACAF play by defeating Nicaragua’s Diriangen General, 3-nil, at the MCC in Belize and then drawing with them, 1-1, in Nicaragua.

“June, 1989 – Coke Milpros goes on strike, refuses to play the decisive 3rd national semifinal playoff game against Duurly’s, after drawing the two previous encounters at the MCC (2-2 and 1-1).

“October 20, 1989 – Milpros is fined $200.00 by BNFA for non-appearance for the third semifinal game against Duurly’s; in default ‘suspended from football for a period of three months effective March 1990.’ Milpros refuses to pay the fine, declines participation in the Belize City 1989-90 competition, and appeals its case to the National Sports Council. No response. (D. Cruz was both BNFA President and Director of National Sports Council.)

“November, 1989 – Milpros requests Belize District Association secretary to forward its appeal to the General Assembly meeting of the BNFA in December.

(Meanwhile, some of the Milpros players were playing in the Belize City 1st Division competition with a new team called Miami Nites. But they still claimed loyalty to Milpros, whenever the team was called up again.)

At the November 25 BNFA General Assembly meeting, President David Cruz declined to run for re-election, and Bowen & Bowen’s Coca Cola manager Nick Pollard, Jr. was elected new BNFA President. After the General Assembly voted to reinstate Milpros, coach Winston Michael and manager C. Hyde, in attendance as guests of Belize City Chairman Henry Baizar, immediately requested that its official appeal, which had been ignored by the former BNFA President, be dealt with by the new BNFA Executive, by appointing an Appeals Committee.

The new president, Nick Pollard, Jr., the former sponsor representative of Coca-Cola Milpros, declared that no appeal would be entertained, as a champion had already been declared; however, he would appoint an Inquiry Commission into the case presented by Milpros regarding their suspension from the BNFA.

After some months passed, it became apparent that the Commission’s report would not be tabled at any official meeting of the BNFA.

There was pressure indeed, and even some talk from inside the BNFA executive that the president might resign; but it did not happen. The details of that are best described by others.

What we know is that the tide was turning in favor of Milpros’ struggle for justice. And, while the appeal verdict never materialized, it was generally agreed that Milpros should be welcomed back into the football family of the BNFA.

October 25, 1990 – a Milpros press release noted that: after the BNFA “executive responded by flatly rejecting any consideration of placing Milpros in its planned ‘premier league’ or ‘super league,’” and the Belize City Association (BCA) “decided it had to take a vote on whether to accept Milpros back into the association;” and after “all the clubs present voted in favour of having Milpros as a part of the association;” Milpros expressed “its sincere appreciation for the support shown by 2nd and 1st division clubs in Belize City;” but was “convinced that the time has come to form a real semi-pro league under the BNFA constitution, involving all the top teams in the country…”

Once the word was given for Milpros to be welcomed back into football, it was coach Winston Michael that immediately launched the cry and campaign for us to form a semipro league. This idea had been discussed before; it got started way back in the days of Mugger and Independence in the 1960s, and with the Stann Creek Selection in the latter 1970s; but now was the time to make it happen.

Having gotten the green light back into football, Milpros began lobbying other 1st Division teams from across the country to join in forming our own autonomous semipro league, affiliated to the BNFA, as its Statutes provided for.

After the chairman opened the floor, the panel consisted of Hubert Bradley, Delhart Courtney and Henry Baizar. The meeting was cordial and constructive. The semipro fever was catching on. An especially positive indicator was the warm sportsmanship shared by the representatives of fierce competitors, Duurly’s/Belikin and Milpros, who both agreed that the tournament controversy was caused by maladministration of the competition, and not by either club.

Saturday, February 9, 1991 – A follow-up meeting, the “first General Assembly of the BNFA Semi-Professional League,” was held at WASA conference room, where the pro-temp chairman was Milpros coach, Winston Michael, and pro-temp secretary was Nolbert Moss of Wagiya FC. Clubs represented at this meeting included: Wagiya, Milpros, San Pedro, San Joaquin, Yabra Guinness, Juventus, Verdes, Duurly’s Belikin, La Victoria, Santino’s Hotpoints, Placencia/Monkey River. After discussing the criteria for membership in the league, the meeting unanimously agreed that the kickoff date for the new Semi-Pro League would be March 10, 1991. Each club delegate was asked to submit two names of individuals to be consulted for consideration as Commissioner, Treasurer, Secretary and other executive offices of the League. The chairman then informed the assembly that BNFA president Nick Pollard had advised him that BNFA was unable to field a Belize National side for an upcoming Nations Cup tournament, and was requesting the new League’s assistance. With a deadline extension of February 13 for a financial commitment of $30,000.00, the general assembly nevertheless voted unanimously to take up the challenge. And their initial steps included the appointment of the National Team coaching staff, which consisted of Winston Michael, Mr. Contreras, Nolbert Moss and Cristobal Mayen. The date for the next meeting was set for the following Saturday, February 16, at the same venue. The ball was rolling.

We can’t locate the date or the minutes of the next meeting, but the BNFA Semi-Pro League Executive was in place at a joint meeting with the BNFA Executive in time to schedule a subsequent meeting for March 6. The Semi-Pro League Executive in place then consisted of: Commissioner – Telford Vernon; Treasurer – Clarence Grant; Secretary – Gustavo Perera; and Members – Russell Vellos, Alger Bradley, Javier Castellanos and Winston Michael.

Amandala printed a promotional flyer (see below) for the sudden-death semifinal playoff on December 1 between Milpros and San Pedro at the MCC, which Milpros won, 1-0, on a 48th minute goal by the veteran Gilroy “Coro” Usher.