Flood waters cause much damage in Benque Viejo and surrounds 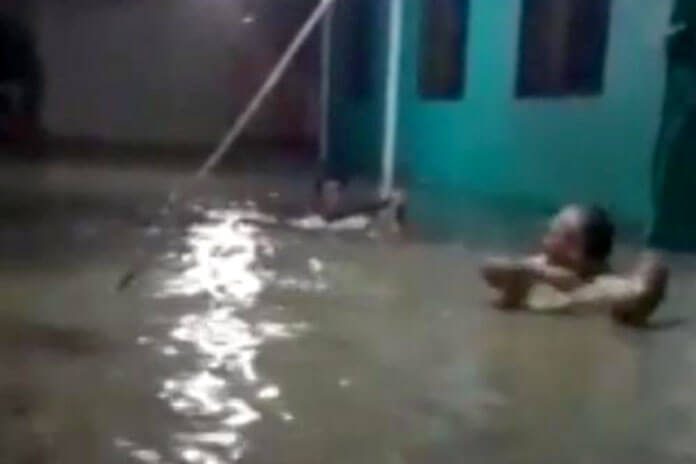 BENQUE VIEJO DEL CARMEN, Cayo District, Thurs. Nov. 7, 2019– Torrential rains in the Cayo District caused flash floods on the Macal River early Monday morning that impacted Benque Viejo, San Jose Succotz and surrounding areas. About 400 families were affected by the floods, and they had to be evacuated to shelters by NEMO (National Emergency Management Organization).

The families lost household furnishings and other personal belongings, and some of their houses and vehicles were damaged by the raging flood waters.

Flood waters were reported to be about 6 feet high in a church in Benque Viejo, and all the belongings of church pastor, Helmuth Velasquez, and his family, including their van, were damaged. A video of the scene at the church showed the pastor hanging on to some planks as he floated in the water in the church.

Helmuth Vasquez, Jr., said that the raging flood waters lifted their van and it crashed into a brick wall and became inundated. He said that everything in their living quarters was under water, including beds, sofas, refrigerators, and stoves. He said the flood waters rose over a concrete wall that was constructed to act as a buffer against flooding.

The flood waters also damaged the well and equipment of the Belize Water Services, and this caused a disruption of the water supply to San Ignacio, Benque Viejo and other areas.
A reporter at Plus TV who was at the scene said that one of the major factors that led to the massive flooding was a small culvert and small drains that did not accommodate the volume of the flood water.

NEMO said that they have begun an assessment and that they are assisting those who were most affected by the floods with items to meet their most urgent needs, like food, stoves, mattresses, and other things needed to make them comfortable. They have also given the people disinfectant, shovels, and cleaning materials to enable them to start cleaning their homes so that they can get their lives back to normal.

Houses on elevated land that were damaged will be repaired, Edmond Castro, Minister of NEMO, said. The minister said that they don’t think the residents of the most affected areas will have any more problems with flooding, because those persons who reside in the areas which are most vulnerable to the floods will be given lots to build elsewhere.

During the water shortage, when BWSL was down, the Belmopan City Council, in collaboration with the San Ignacio Fire Department and the Town Board, took water in trucks to the affected residents..