Flooding cuts off traffic between Belize City, Belmopan and Dangriga  NEMO announces that a flood warning is in effect 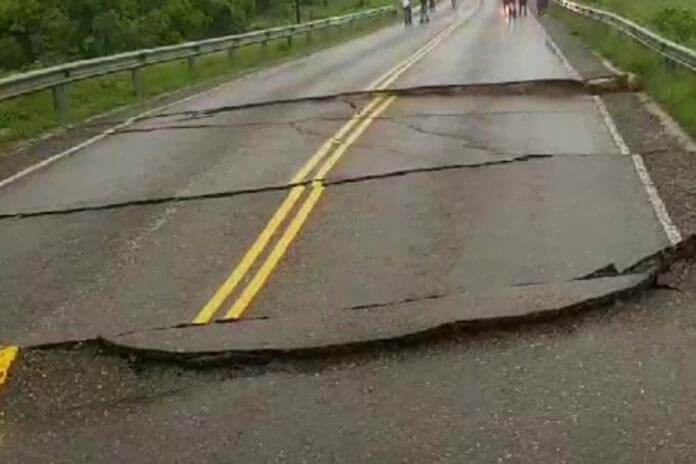 The flood waters have brought travel between Belize City and Belmopan to a halt, as water has eroded a part of the George Price Highway — causing an “uncrossable” split; and travel to Dangriga from Belmopan has also been affected, due to a broken culvert in St. Margaret’s Village.

The NEMO release said,” …flooding is occurring in most communities and on the major highways throughout the country. A flood warning is in effect.”

The NEMO release advised the public “…not to travel on many secondary roads in the rural areas, and in particular on two of our major highways, due to the road approach near Mile 38 1/2 on the George Price Highway between Belize City and Belmopan, and on the Hummingbird Highway between Dangriga and Belmopan due to road washout in St. Margaret’s Village.”

NEMO advised citizens to stay at home, as only emergency life-saving travel is recommended.

“Parents are advised to monitor their children and do not let them play or walk in floodwaters.  All are advised not to cross flooded rivers and creeks. SIX INCHES OF FLOOD WATERS CAN SWEEP YOU OFF YOUR FEET. If where you are is not safe, move to higher ground and move away from streams and riverside,” NEMO advised.

“Motorists are asked to drive with extreme caution when driving the highways and secondary roads. DO NOT DRIVE THROUGH FLOOD WATER; IT CAN BE VERY DANGEROUS,” NEMO said.

We attempted to speak to the Chief Engineer at the Ministry of Works, but were told that he is touring the flooded areas, and no one else was available to speak to us.

Feature photo: This portion of the George Price Highway buckled under the pressure of the raging waters