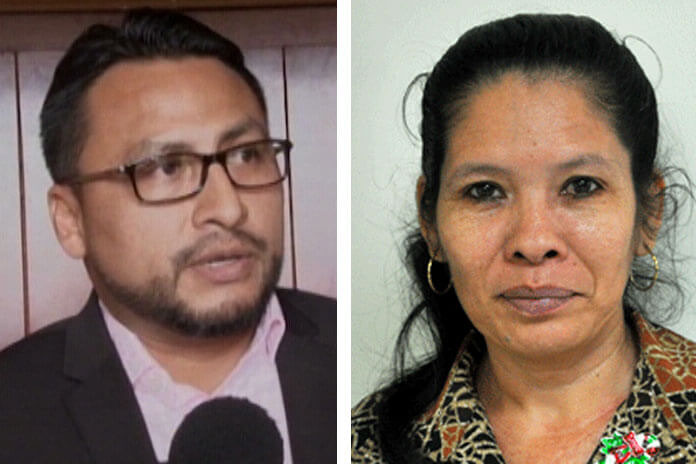 BELIZE CITY, Fri. Feb. 28, 2020– Senator Salazar, who chaired the public hearings of the Senate Select Committee on the Immigration and Nationality Department, has been very tardy in producing his report on the findings that were garnered from those hearings.

Today, Senators Mark Lizarraga and Senator Elena Smith spoke to reporters about a draft report that Senator Salazar emailed to them yesterday, Thursday.

“Interestingly enough, yesterday we received the first draft of the report from Senator Aldo Salazar. I was copied on it, as were you, and it is interesting to note that the Opposition was not copied on that email. And I found it to be strange and the games continue,” Senator Lizarraga said.

At a press conference last Monday, the National Trade Union Congress of Belize introduced a 6-point set of demands it is making of the government of Prime Minister Dean Barrow for good governance.

Last Thursday, the NTUCB and its 10 affiliate unions took to the streets in a spirited protest against corruption in government. The protest was followed by a rally at the Memorial Park.
One of the demands on the NTUCB 6-point list is for the Senate Select Committee to release its report on the public hearings on the Immigration and Nationality Department that was concluded in December 2017.

The item came up at a meeting between Prime Minister Barrow and the NTUCB on the day following the protest, Friday.

According to the leaked minutes of the meeting between the NTUCB and Prime Minister Barrow, Senator Aldo Salazar, the chairman of the Senate Select Committee, told the Prime Minister that he was abandoned by the other senators on the Senate Select Committee. Salazar named Senator Elena Smith as one of the senators who did not assist him in the preparation of the committee’s report.

In clearing her name, Senator Smith, who is also the president of the Belize National Teachers Union, told reporters, “I think it’s quite unfortunate. A lawyer told another lawyer that the report wasn’t ready because I did not do my part in preparing the report. I think, as you’ve said, we’ve all heard Senator Salazar saying to the media that he’s working on it. His personal and professional duties have caused him not to complete it on time, but he knows it’s his responsibility, and he will finish it when he can.

“So, for me to be blamed for not having a report is really beyond me. The standing orders are very clear. The chairman is responsible for preparing that report and presenting it to us. If it is that the other senators are not in agreement with what is presented, then we can prepare our own minority report. That is how that happens.”

“As the Senate Select Committee, we also have an attorney that was hired to work with us, the Committee, and to assist the Chairman in putting that report together. So, the portion of the report that dealt with the summary of the hearing, those were sent to us earlier. Those were dealt with,” she went on to say.

“The other part, which would have the recommendations, those were not shared with us. And so, we could not comment. So, I don’t know how we got from the Chairman being responsible, to Senator Smith not taking up her responsibilities, or they tried to reach her, and couldn’t find her. I don’t know if I was living somewhere else. But, they couldn’t find me, I suppose, to prepare the report,” Senator Smith further said.

Senator Smith was asked if Senator Salazar was making excuses.

She replied, “…How many times have we been asking him for the report. He keeps saying, my personal…”

“Yes, that was the word, thank you, and his professional [commitments] kept him from doing so? What are those? Aren’t those excuses? Whether they are valid or not, they are excuses,” Senator Smith remarked.