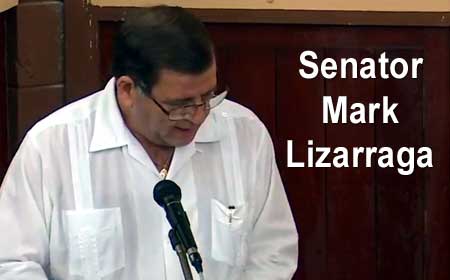 BELMOPAN, Thurs. July 6, 2017–At today’s sitting of the Senate, Mark Lizarraga, senator for the business community, said that outstanding or uncollected property tax due to the Government of Belize is in the hundreds of millions, with as much as 400 million dollars due from foreigners.

The assertion was made in the context of the debate on the Stamp Duties (Amendment) (No. 2) Bill put today to the Senate from the House, which proposed an increase in the rate of stamp duty for land transactions from 5% to 8%.

Attorney General Michael Peyrefitte, a Government Senator, noted in the Senate that the increase would not apply to CARICOM nationals and Belizeans, in answer to a question from Senator Lizarraga over whether applying the rate to foreigners would not violate the Treaty of Chaguaramas, under which the CARICOM Single Market and Economy is established.

“Are we further killing the goose?” asked Senator Lizarraga, whose main contention was over the wider repercussions which he said that the stamp duty increase would have: among them, he said, would be a decrease in demand for properties in Belize and a fall in property values.

Instead of increasing the stamp duty, he said, Government should start by collecting that outstanding $400 million. He suggested that a new mechanism for payment should be introduced to make online payment and payment by credit card possible for Belizeans living abroad and for foreigners who own land in Belize, as there have been times that the extensive delays in the processing of payments have meant that persons had to leave Belize without settling their bills.

He pointed to information published by agencies such as the International Monetary Fund and the World Bank which discourage high levies on property. In the case of Belize, he said, land transactions may attract a real estate tax that could be as high as 10%, plus 12.5% General Sales Tax and a 2% legal fee, and now an 8% stamp duty (up from 5%), for a total of 32.5% on top of what the property is costing, he said, claiming that the increase would act as a “perverse incentive” for further tax evasion.

“Raising the taxes goes against everything we’ve said and heard,” Lizarraga argued.

In reply to Lizarraga, Senator Peyrefitte said, “…there is no such thing as a lack of demand for Belizean property, which is demanded heavily by both Belizeans and non-Belizeans. That will not be affected.”

He said that in places in the US, sellers pay a 15% capital gains tax. Belize’s 8% is a start but it is still a joke, said Peyrefitte.

Government Senator Aldo Salazar said that the ownership of land in Belize by foreigners is a privilege and not a right, so he does not see anything wrong with foreigners paying a different rate of stamp duty. He went on to say that real estate agents charge a commission starting at 8% (but which may go up to 12%), “…so the realtors are making a commission which is more than what the Government is taking—at the moment, 5%…”

He also claimed that prices in Belize are more competitive than anywhere in the CARICOM region.

Senator Ashley Rocke, representing the church community, said that although churches were known to enjoy no taxation on their land, now churches are told they need to pay the tax, and whereas the big churches are probably able to “maneuver” themselves, it is hard for the smaller ones to cope.

“We are left to depend on our northern brothers for support,” he said, adding that the hiking of this tax is going to put pressure certainly on the financing that the churches may get.

Senator Osmany Salas, who represents the NGO community, signaled that: “[The tax increase] could lead to increased pressure for undervaluation and therefore corruption, as has been noted.”

Opposition People’s United Party Senator Michel Chebat said that the overall impact of the measure on the economy needs to be assessed, “especially when we have an already ailing economy…”

He noted that the issue does not stop only at the increase in tax, but after lodging their documents, parties find that inevitably their transfer documents are reassessed for increased payment of stamp duties.