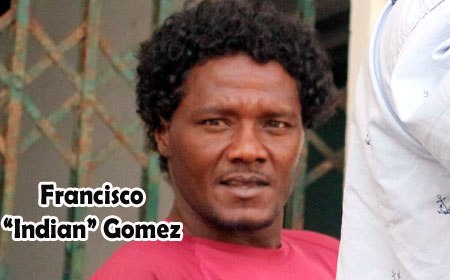 BELIZE CITY, Mon. Apr. 27, 2015–A resident of Boston Village, Belize District, was remanded to the Belize Central Prison after he was arraigned on a single count of sexual assault this afternoon when he appeared before Magistrate Ladona John.

Francisco “Indian” Gomez, 38, a laborer, pleaded not guilty to one count of sexual assault when Magistrate John read the charge to him.

Magistrate John upheld the prosecutor’s objection and remanded Gomez to prison until his next court date on June 22.

The incident allegedly occurred on the afternoon of Saturday, April 18, in a village a distance from where the child lives, where she had gone to visit her grandmother, who is wheelchair-bound.

Around 1:30 p.m., on the day of the incident, the child, who resides with her parents in an area near Burrell Boom, was watching a movie on a DVD player when Gomez arrived at her grandmother’s house.

The child told police that when she got up and went to the kitchen to get some water, Gomez slapped her on the right side of her buttocks, and told her that she “has a fat ass.”

She went back to watching her movie and Gomez tried to cut the movie off, telling the child that what she was watching was foolish.

According to the child, Gomez took the DVD out of the machine and slapped her in her face.

The child then went to her grandmother’s room and told her what had just happened.

The grandmother told Gomez to leave the house.

He left the house, according to the child, but within a short time he returned and grabbed her two cheeks and tried to kiss her.

The child told police that, while trying to kiss her, Gomez told her that he wanted her to have a baby for him and that if she told anyone, he would kill her.

Gomez then left the house, promising the child that he would return for her.