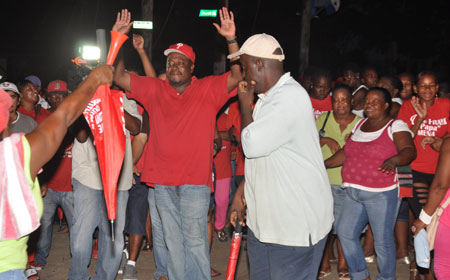 DANGRIGA, Thurs. July 9, 2015–The battle lines were distinctly drawn in the Dangriga by-election yesterday, as waves of red-and-white T-shirt-wearing United Democratic Party (UDP) supporters with their message “We love our brother,” contrasted with similar numbers of blue and white T-shirts worn by People’s United Party supporters which carried the message: “Power to the People.”

The two groups descended like battle forces and were spread out in the six polling areas of Dangriga Town, Sarawee and Hope Creek, where balloting began at 7:00 a.m. and ended at 6:00 p.m. to elect an area representative for the Dangriga seat of the House of Representatives, vacated by the PUP’s Ivan Ramos, who suddenly resigned, triggering the by-election.

In the Dangriga by-election, he handily beat the PUP’s Anthony Sabal

Tensions were high, as the supporters of Belize’s two main parties from all across the country faced off with each other at the polling areas. The large deployment of police officers in paramilitary uniforms kept the peace, and there were few major clashes between the two groups.

Shortly after 8:00 p.m., the news began filtering out of the counting station at the Sacred Heart Parish Hall that Frank “Papa” Mena had won the election.

The PUP supporters had already begun to clear out of the area when it became apparent that the night would belong to the UDP.

When the result was officially announced, it was “Papa” Mena, who came out on top, garnering 2,164 votes. The PUP’s Anthony Sabal received 1,526 votes, and the independent candidate, Lucas, received only 14 votes.

A total of 6,275 registered voters make up the Dangriga, Sarawee and Hope Creek constituency and out of that total, 3,735 voters cast ballots in the by-election; Mena got 57.94 % of the total votes cast.

The Belize Green Independent Party got 0.37% of the votes cast, and there were 31 rejected ballots.

The PUP candidate, Anthony Sabal was the first to come out of the counting station, and he gracefully conceded defeat.

Sabal, sounding more like a diplomat than a man who has just lost his first bid in electoral politics, said: “It’s the people that decided, and the power belongs to the people.”

The UDP leader and Prime Minister, Dean Barrow, came down the steps of the counting station obviously elated by his party’s recapturing of the Dangriga seat, last held for the UDP in 2012 by Arthur “Turo” Roches.

Barrow told reporters, “… we are all very pleased; I think this is a positive referendum result for the government. We are, of course, conscious that success requires additional efforts.”

Barrow added, “We will do our best to bring more progress to this particular constituency of Dangriga, Hope Creek and Sarawee.”

Barrow said that he was absolutely thrilled by the size of the victory. Mena defeated Sabal by 638 votes.

Barrow said that if the people were not pleased with the government’s performance, it would have been reflected at the polls.

Prior to the knowledge that there was going to be a by-election in Dangriga, PM Barrow had pledged one million dollars for works in Dangriga. The works for which that money was allocated have not begun as yet, Barrow confirmed. “So there is no need to allocate additional moneys for Dangriga,” he therefore commented.

In speaking about his victory, Mena remarked, “It feels good. It shows that my people believe and we will walk through this together.”

Mena said he had no doubt about the outcome of the election, but he had not been in the counting room because, he said, “I never inna any counting, cause I can’t handle that. I can’t deal with da vibes deh.”

The newest member of the House of Representatives said he did not offer himself for political office for fame: “I did it for my people, because my people believe inna me,” Mena said.

The UDP now controls 19 of the 31 seats in the House of Representatives. The PUP has lost all elections since the general elections of 2003. The UDP has been able to increase its numbers in the House of Representatives between January and now in the two by-elections held. In Cayo North, Dr. Omar Figueroa demolished the PUP’s Richard Harrison, and the Dangriga seat formally held by the PUP is now in the hands of the UDP.

Today, the Government of Belize announced that Frank “Papa” Mena will be appointed as Minister of State in the Ministry of National Security, the post that disgraced ex-Minister Elvin Penner previously held.