More “freak storms” could be just one manifestation of climate change 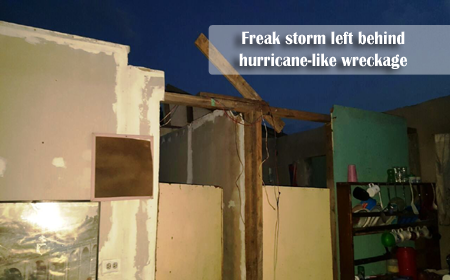 BELIZE CITY, Wed. Apr. 26, 2017–Just this past weekend, an unusual weather event in Biscayne—villagers say it was a tornado, the government said it was a “freak storm”—ripped through that rural community leaving behind hurricane-like damages to 9 homes in the area. According to the National Emergency Management Organization, similar freak storms affected residents in Crooked Tree village on August 20, 2011 and Maskall Village on October 8, 2014. Could it be that these bizarre storm events are becoming more prevalent due to our changing climate? 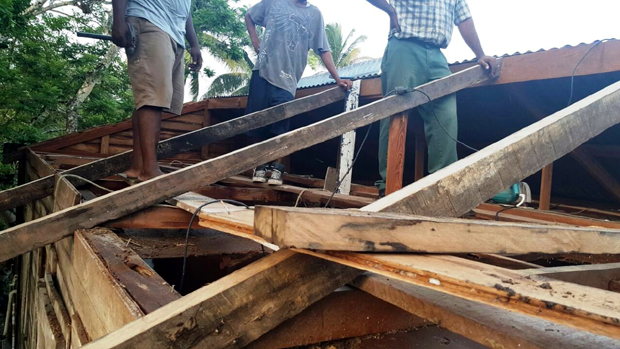 We put the question to Ann Gordon, national coordinator for the National Climate Change Office in Belize, who suggested that they might. She told Amandala that the temperatures in Belize have notably increased over the past half-a-century.

The wider Caribbean has been grappling with droughts, which pose a threat to the region’s critical water and food supplies

“Based on the records that we have, observation records, the temperature in Belize has risen by about between 0.9 to 1 degree Celsius from 1960 levels and that shows that the nighttime temperature… is even higher,” she said.

“When we have very warm temperatures, the atmosphere can become very unstable… Because of the warming and the heating, we could expect more intense storms. That energy has to go somewhere and that energy [gets unleashed] in storms. That is the reason why sometimes you see we have stronger hurricanes. We are expecting stronger hurricanes. More of these will happen in a warmer world,” Gordon added.

Experts on climate change, including those at the Caribbean Community Climate Change Center based in Belize, have been warning that if the temperature heats up beyond 2% Celsius, the consequences will be catastrophic. 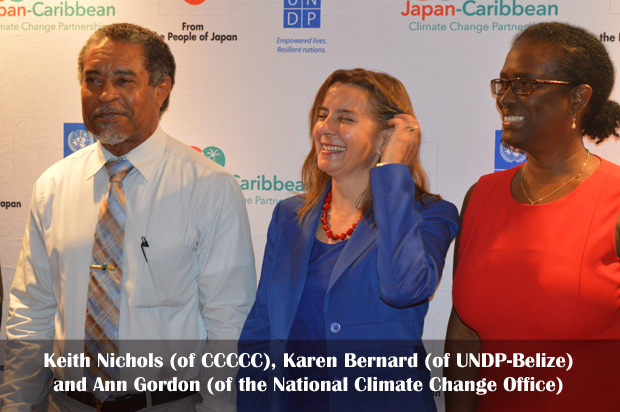 “If we ask the average person on the street, what does that mean, 2 degrees for them, they might think that 2 is a really small number; it doesn’t really mean anything specifically to them. So that’s a challenge that as media experts, all of us are here to work on,” said Karen Bernard, Deputy Resident Representative, United Nations Development Programme, Belize, speaking on the occasion of Wednesday’s launch of Belize’s climate change campaign as well as a regional two-day workshop on climate change for media professionals from CARICOM.

Belize’s campaign’s slogan is “Feel the change!” and it aims to build public awareness on the clear and present danger which climate change poses, most evident today in what people are experiencing as hotter weather.

“We have also seen erratic rainfall. We have seen that in the dry season you get these intense rainfalls. You have sometimes a prolonged dry season and then after that comes probably intense rain so you have drought on one hand and flooding on the other hand. For example, two years ago when you had that prolonged dry season where we had corn and beans lost, about US$28 million,” Gordon told us.

Soon after that event, there were intense rainfalls and flooding in Belize City.

“So what we are seeing is changes in rainfall patterns and in the seasons…” she said, adding that mangoes are now ripening later too.

“People are seeing the changes, but they do not connect them to the changes in climate,” said Gordon.

She told us that there have also been adverse impacts on Belize’s barrier reef, pointing to a report on how Belize is addressing climate change, which had identified that Belize’s coral reef has been affected due to the warmer sea surface temperature, resulting in massive bleaching of corals.

“That, in turn, will affect the fishing industry, because the coral reef is a habitat for fish and that… coral reef also serves for us, it shelters us from storm surges and those extreme hurricanes,” Gordon elaborated.

Yoko Ebisawa, project manager for the UNDP/Japan-Caribbean Climate Change Partnership, collaborators for the campaign initiative in Belize, said at today’s launch that, “…climate change is one of the most serious challenges to the Caribbean and to Belizeans as well… We hope that the campaign will be an opportunity for the people of Belize to feel the change and be a part of the change, to be more resilient to a changing climate.” 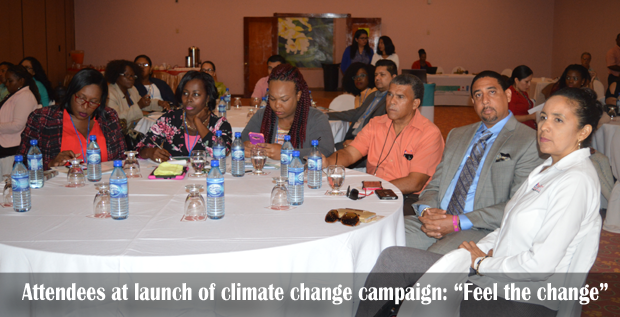 Keith Nichols, Project Development Specialist, Caribbean Community Climate Change Center, pointed out that climate change is sometimes dismissed in the media as a topic that is not “sexy.” However, he pointed to recent catastrophic events in the Caribbean, primarily flash floods and intense storms, which have devastated several communities across the Caribbean, most notably in places like St. Vincent and the Grenadines and in Dominica.

Speaking with Amandala, Nichols pointed to droughts as one current impact of climate change. However, he pointed out that droughts also threaten the region’s water and food supplies, since it disrupts crop cycles. There are some Caribbean islands which face dire challenges because they don’t have rivers. Rain water harvesting, said Nichols, is one of the actions that can be taken to secure a reliable water supply where shortages exist.

Whereas there has been much talk about the impact of climate change on our weather, there is also a suspected link to the rise and spread of mosquito-borne illnesses such as Zika.

One key message in the campaign is that people need to act now, before it is too late, to counter the impacts of climate change. Deforestation makes matters worse, and the simple act of planting a tree – or better yet preserving mangrove habitats that serve as carbon sinks, thereby countering the effects of climate change – is being encouraged as a part of the campaign.