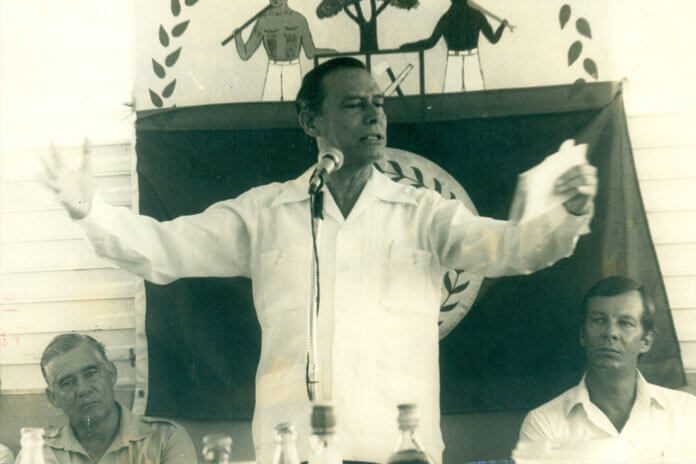 As we enter the New Year, which will be an exciting one in the politics of Belize, what with a ruling United Democratic Party (UDP) leadership convention in February and general elections later in the year, I will conclude my series on Creole political leadership with a look at developments in the People’s United Party (PUP) in the post-Lindy Rogers/Harry Courtenay era. (I ended my analysis of UDP Creole leadership in the post-1950 period with my column in the last issue of the newspaper.)

Carlos Diaz, in retrospect, should have emerged as the Creole powerhouse in the PUP after C. L. B. Rogers lost Mesopotamia in 1979 and after Carlos replaced Harry Courtenay in Lake Independence for the 1984 general elections. But Carlos lost Lake I in both the 1984 and 1993 general elections (he won it in 1989).

The fact of the matter was that Lake I had been strengthened with some PUP families for the 1979 general elections, and since 1998 Cordel Hyde has basically established that Lake Independence is a PUP constituency. But Carlos lost to the UDP’s Hubert Elrington twice in three general elections, whereas Cordel has basically sent Hubert into retirement.

It appears that after their unexpected June 1993 general election defeat, the bosses of the PUP decided to replace Carlos in Lake, and they turned to me. Hon. Said Musa, who was then one of two PUP Deputy Leaders, if I remember correctly, asked me to come to his North Front Street law office to meet with him and Sir Barry Bowen, the most impressive and intimidating business magnate in Belize at the time. (I had given up the editorship of Amandala to concentrate on semi-pro basketball, which I believed to have great business potential.)

Amandala in 1993 was very successful, very popular. Our Kremandala Raiders had just defeated Santino’s Hotpoints to win the 1993 semi-pro basketball championship. This was an extremely meaningful victory for the roots zinc fence, because that victory came in mid-July 1993, just two weeks after the UDP had defeated the PUP and formed a new government. The owner of the Hotpoints, Santi Castillo, apart from being the scion of the San Cas family which had dominated business in Belize from the 1950s through the 1980s, had been a UDP general election candidate (Belize Rural South), though unsuccessful, in the June 30, 1993 general election. He enjoyed the support of the new Dr. Manuel Esquivel government when his team met the Raiders for the championship two weeks after the election. And no one needs to tell you Belizeans how much influence governments bring to the table where any public activity in Belize is concerned, even sports.

There were at least two such meetings which took place at Mr. Musa’s office, and Mr. Bowen declared that he would support me if I agreed to take over Lake Independence for the PUP. Both Mr. Musa and the other PUP Deputy Leader at the time, Hon. Florencio Marin, Sr., had already expressed the same opinion.

I asked Sir Bowen if he would finance my campaign, but he said that his donations would go to the party. My own feeling was that he had personally financed Dean Barrow in the 1984 general election, so this different position was somewhat of a warning sign for me.

Having resigned from electoral politics in 1974 after that year’s general elections, I was pressured by the then ruling PUP to run in the 1977 Belize City Council. Against my better judgment, I had yielded to the pressure and ended up being embarrassed by the December 1977 CitCo results.

The bottom line is, you cannot expect to participate successfully in electoral politics in Belize if you wrangle with the major Christian churches, as I had done between 1969 and 1974 in the quest for African and Mayan history in Belize’s educational curriculum.

I decided to decline the offer to replace Mr. Diaz, my friendly Partridge Street neighbor, but later asked my second son, Cordel, who was finishing up his university studies at Syracuse, New York, if he would be interested in electoral politics. Sometime later in 1993, or early in 1994, Cordel agreed to take on a political posture.

The UDP assumed that I was trying to live out a political dream through Cordel, but the evidence of Cordel’s years in the Musa government between 1998 and 2008 shows that I never interfered with his jurisdiction. In fact, Cordel Hyde became entirely his own man as early as 1994 (March?) when he defeated Mr. Diaz and one Mark Usher to become the chairman of the PUP Lake Independence constituency. One week before that convention I had advised him to withdraw, because I did not believe he could then defeat the incumbent (Carlos) in a three-way convention, and Usher had refused to exit the race. Cordel went ahead on his own, and won. He did it his way.

My personal opinion, because of the way things played out with that convention, was that the PUP leaders’ offer for me to replace Carlos Diaz in Lake, had not applied to the young Cordel. Today, Cordel is National Deputy Leader of the Opposition PUP, which means he is, constitutionally, the second most powerful man in a political party which may form the new government of Belize later next year.

At the time he first became a Cabinet Minister, in August of 1998, Cordel Hyde was not the most powerful Creole leader in the PUP. The reality was that the attorney Dickie Bradley, although he had failed to win the Queen’s Square seat in the 1998 general election, was favored by the Said Musa/Ralph Fonseca combine which ruled the PUP.

In conclusion, I need to say that the pluralism of the Kremandala organization has led to a situation where our unity is threatened from time to time. The day-to-day business managements of the newspaper, radio and television are in the hands of people with different socio-economic perspectives. Perhaps just as critical are the different socio-economic perspectives of all the high-profile personalities who have emerged behind the zinc fence over the years. Since I remain with the title of Kremandala chairman, although with reduced functional power, I will have to deal with this fundamental, growing challenge in the New Year. Complicating everything has been the fact that we have been under extreme pressure from the ruling UDP since late 2013 and the Elvin Penner/Citizen Kim passport scandal.

I have explained to you that I did not interfere in Cordel Hyde’s Cabinet career. My support for his political work in the PUP is unconditional, but I reserve the right to criticize the party itself on specific issues and at specific times. This may well strike you as a tricky game to play, and my response will be that our history here on Partridge Street has been that our allegiance to the nation-state of Belize is always greater than our support for any political party. Because of that national vision, we have on several occasions been battered by ruling political parties over the decades.

P.S. There is a prelude to the 1993 Musa/Bowen/X Hyde meetings which should be mentioned. It is that in late 1990 and early 1991 there was a fight between Kremandala and the Bowen group of companies which began with the fact that a Bowen executive was in charge of amateur football in Belize and was victimizing (for lack of a better word) a football club managed by Charles Hyde, one of my younger brothers.

At the time, Mr. Musa was Minister of Sports in a PUP administration led by Rt. Hon. George Price, and my opinion is that Mr. Musa prevailed upon Sir Barry to “allow” the birth of semi-pro football in 1991. (Semi-pro basketball followed in 1992.)

The events which led to the birth of semi-pro football are never discussed today by the Belize sports media, one reason being that two of the elder statesmen in the sports media (Broadcasting Corporation of Belize insiders) who are still prominent and powerful today, were clearly on the Bowen payroll when the aforementioned fight was taking place.

Feature photo: In 1980, Barry Bowen (right), who was in a beer competition with Charger at the time, came to a Labor Day rally at Independence Hall to pay his respects to Premier George Price (center). (GIS)

There does exist a power structure in Belize. Perhaps there are several power structures, if we choose to look at things more closely. The...
Read more
Publisher

On the occasion of the passing of Dame Minita Gordon last Friday, a lady of surpassing dignity and decency, Belize’s first Governor-General and the...
Read more
- Advertisment -