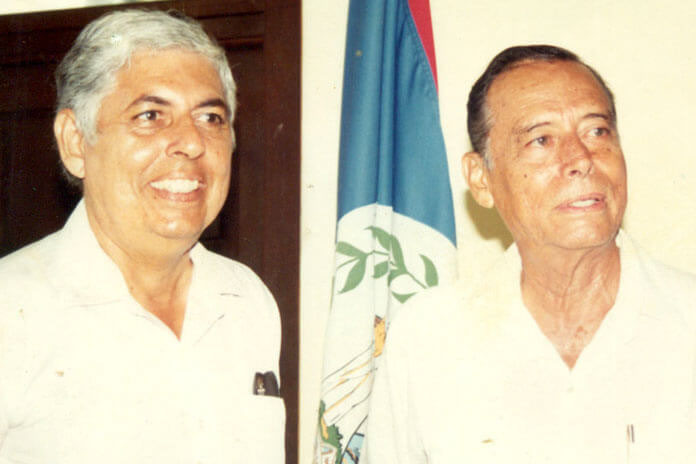 To a certain extent, the late Odinga Lumumba, Rufus X, and I “made” the new United Democratic Party (UDP) Leader, Manuel Esquivel, in the streets of Southside Belize City in 1983 and 1984, enabling his ascension to the Prime Ministership in December of 1984.

We really had no idea how deeply Esquivel was committed to the major merchant forces in Belize, especially Santiago Castillo, Ltd., and how much he believed in free market capitalism, foreign direct investment, and all the other aspects of what people now call neoliberalism.

Within a couple weeks after becoming Prime Minister, Mr. Esquivel publicly denied that Lumumba, a hero of the anti-Heads of Agreement protests in 1981, had been a supporter of the UDP, and then in 1987, when Rufus X attempted to replace Sam Rhaburn as the UDP candidate for the scheduled 1989 general election, Mr. Esquivel put his foot down, and his UDP Chairman, Derek Aikman was instructed to tell the UDP faithful, and the public, that all the people Rufus X had registered in Belize Rural North for the UDP convention in that constituency were actually PUP members and supporters. What Mr. Esquivel’s UDP did was disenfranchise Rufus X, who had been a total UDP from the time of the party’s foundation in September of 1973. 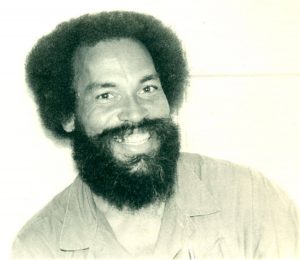 Rufus X had been one of the five UBAD officers (the remaining five UBAD officers, under my leadership, remained independent) who believed that the new UDP (originally the “Unity Congress” in early 1973) was the way for the Opposition parties – National Independence Party (NIP), People’s Development Movement (PDM), and UBAD Party to go. Rufus X was a young man at the time who was absolutely convinced that Hon. George Price and the People’s United Party (PUP) were ruining the country.

As long as I had known Rufus, from the time I had taught him at Belize Technical College in 1968/69, he was focused on Hon. Fred Hunter, the PUP area representative for Belize Rural North from 1961 onwards. The thing you have to understand about Fred Hunter is that he was a descendant of one of the Baymen families from the eighteenth century, and, having been a boxer in Belize’s Golden Gloves as a youth, he was a manly type who appealed to the hardy people of Crooked Tree, Lemonal, Maskall, and other Belize Rural North villages.
Some of you will know that Rufus X himself was and is the quintessential manly type, so it appeared to me that Rufus became a personal antagonist of Mr. Hunter. Rufus felt that it was his work and personal reputation which had enabled Sam Rhaburn, a relative nonentity, to defeat the mighty Fred Hunter in the December 1984 general election. 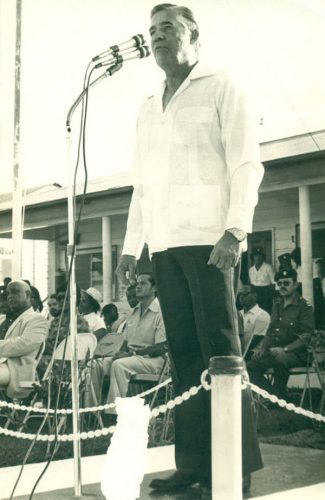 At some point, early in the UDP 1984-89 term, Rufus became disenchanted with Rhaburn’s performance in office and decided to become the UDP Belize Rural North candidate himself. But Rhaburn, who had started out as an officer in the Belize Police Force, had qualified himself as an accountant and was an employee of the Net Vasquez accounting firm when he entered politics and was elected to the House of Representatives in 1984. Net Vasquez, who is still very powerful at the executive level in Belize Telemedia Ltd. (BTL), in 1984 was the chief accountant for Mr. Santiago Castillo, Sr., the multimillionaire who was still the biggest name in business in the early 1980s. Net Vasquez, who had been one of the founders of the Liberal Party (Esquivel, Rodriguez, Lawrence, Thompson) in 1972, considered himself Manuel Esquivel’s personal political bouncer, so to speak.

So when Rufus decided to take out Rhaburn, he was taking on the shadowy Net Vasquez, who was right next to both Mr. Castillo and Prime Minister Esquivel. And so, the UDP just downright refused to consider Rufus X as Belize Rural North candidate. This was a man who had been absolutely loyal to the UDP from its foundation, and whom I personally had seen risk his life in a PUP crowd during campaigning. It was unfair to Rufus, and I owed Rufus my loyalty.

Although my experiences fighting Mr. Price and the PUP from 1969 to 1974 and from 1981 to 1984 had convinced me that I should never get into conflict with a Prime Minister again, I had no choice but to support Rufus X, who, after he was disenfranchised by Mr. Esquivel’s UDP, decided to run as an independent candidate in the September 1989 general election in Belize Rural North.

As Belizeans watch some of the drama playing out where the post-Barrow leadership of the ruling UDP is concerned, we see some of our roots people putting their bodies on the line for Patrick Faber. But their political parties are not controlled by roots people: they are controlled by the individuals and small groups who have access to what the Caribbean song calls “big money wind.”

Many years ago, when I was a child, party politics in Belize was different, especially in the PUP, where it seemed that roots peoples had a lot of say. In the original National Party (NP) opposition to the PUP in the early/middle 1950s, there was always the feeling that the mighty Belize Estate and Produce Company (BEC) was supporting the NP, but more important than the BEC were all the civil servants who were opposed to the PUP and self-rule.

Anyway, the massive irony of the Patrick Faber situation is that he was a personal favorite of the two most powerful men in the current UDP – Prime Minister Barrow and Housing Minister Michael Finnegan. Something went wrong somewhere, and now Barrow and Finnegan are fighting with all their might to prevent Faber from reaching the top.

You have to understand that in the modern-day political parties in Belize, they can bring out a crowd of people, yes, but the shots are being called from behind the scenes. So that, it’s not really about people power at all.

In the case of the one Patrick Faber, the party had surely giveth, for most of Patrick’s adult life in fact, but now it appears the party is taking away.

Postscript to The Publisher

In my column this Friday, I forgot to mention Hon. Gaspar Vega of Orange Walk North as one of the ruling United Democratic Party’s most powerful forces, and as one who is unalterably opposed, for whatever the reason(s), to leadership by the Hon. Patrick Faber.

Feature photo: Mr. Esquivel and Mr. Price in December of 1984 at the change of government from PUP to UDP

Over the last ten years or so, a couple of the older Belizean Muslims have told me that their understanding is that Charles X...
Read more
Publisher

A couple months ago I heard Sandra Coye say on KREM Radio that she did not support the UBAD call for the 18-year-old vote...
Read more
Publisher

“But the first person I meet is his mother, and racist written all over her. “After 20 months in the States, man, it don’t take...
Read more
- Advertisment -