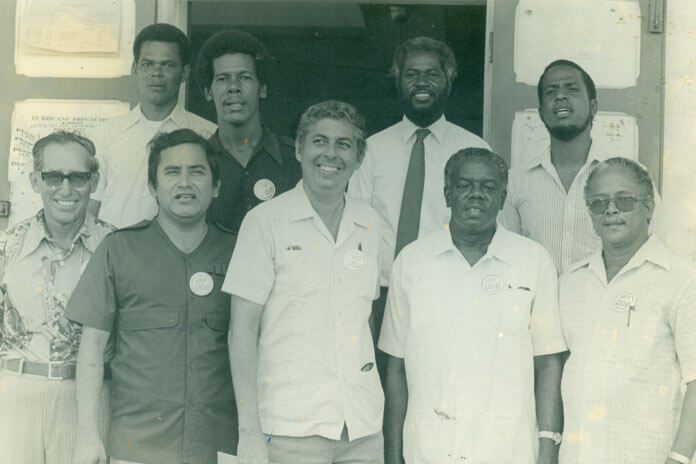 Evan X Hyde’s life is a counterpoint to that of George Price. Both men attended St. John’s College (SJC), but Hyde’s Creole view of the Jesuit orthodoxy has been at odds with the habitual faithfulness of Price. Both men have felt deeply about their “Land of the free, by the Carib sea,” but they were loyal to separate realms. One man emerged as the most influential politician of Belize: the other emerged as the most influential writer.

As the publisher and owner of AMANDALA, the country’s leading independent newspaper, Hyde had more of his words digested by more Belizeans than anyone, including the novelist Zee Edgell or the historian Emory King. The disarming quality of his writing has a great deal to do with AMANDALA’s continued popularity. His personalized riffs in print are antithetical to government press releases.

Mr. Goldson, who made more personal sacrifices than any other Creole leader in my lifetime, never got an opportunity to lead his people legislatively in an authoritative manner. When he became a Cabinet Minister in 1984, he was already blind (the one Carleton Fairweather served as his eyes), and the jury is still out on the most high-profile piece of legislation he authored – the Family Court legislation. The evidence is that there are too many women who have used this well-intentioned piece of original, creative legislation to victimize their children’s fathers. It is high time that some serious investigative work is done on the Family Court. Again, no matter.

I am willing to wager that Mr. Goldson is considered the greatest, most respected Creole leader during my lifetime, although he was definitely not amongst the ranks of the legislatively powerful. Mr. Goldson, few of you know, was a cousin of Sir W. H. Courtenay’s, and it is probably fair to say that by the time Mr. Courtenay died, W. H. would have had to be considered a Belizean oligarch. I do not see any evidence to indicate that Sir Courtenay cared about roots Creoles.

The evidence is monumental, on the other hand, that Mr. Philip loved his people deeply, and was willing to make sacrifices for them. My feeling is that Mr. Goldson’s wife, Hadie, who is still alive and gave birth to six of Mr. Goldson’s children, thought Philip made too many sacrifices for Belizeans. In any case, in one of the most sensational prime time decisions ever, Mr. Philip, at the height of his newspaper’s profitability, sent Hadie to study law in London in 1961. She completed her law degree in 1965, whereupon she returned home, but Mrs. Goldson never made much of an impact on the legal scene in Belize.

Fast forward to early 1972, and Mr. Philip himself decides to study law in London, even though he is already having major problems with his eyesight. Hadie flies to New York City at the same time with their six children, and works as a legal clerk in Brooklyn until 1984, when the Opposition United Democratic Party (UDP) comes to power for the first time, and Mr. Goldson finally receives some of his due.

Now, I would say that since the UDP returned to power in 2008, the two most powerful Creole leaders in Belize are Rt. Hon. Dean Barrow and Hon. Michael Finnegan. But, my personal opinion is that Barrow and Finnegan have bosses to whom they answer at the corner of King Street and Southern Foreshore. When Mr. Goldson became Leader of the Opposition National Independence Party (NIP) in late 1961/early 1962 after the death of the previous Leader, Herbert Fuller, speculation is that Mr. Goldson’s NIP may have been supported financially by the Belize Estate and Produce Company (BEC). I was just a teenager in those days, thus unable to say if Mr. Goldson, an official of the General Workers Union (GWU) when the GWU was in alliance with the anti-colonial People’s United Party (PUP) from 1950 to 1957, had to answer to the octopus BEC when North Front Street called. But, I am positive that Barrow and Finnegan have to answer to King Street and Southern Foreshore. Ask Kaina.

When we speak about the Creole people, we are speaking about a people who endured centuries of slavery in Belize, followed by another century of oppressive colonialism under the British. It is difficult to explain what colonialism does to the colonized’s psyche to those Belizean generations born after political independence in 1981. Let me give this generation an example of British colonialism. Your passport is stamped “British subject.” The fact that you are black automatically means that, apart from the odious stigma involved with the description, “subject,” you are a second class subject, because blackness brings its own degradation. And yet, my generation was so naïve, so innocent, so brainwashed, that we felt absolutely no stigma about being considered a “British subject.” Looking back, we were pathetic.

The point I want to make is that those Belizeans who began to agitate and rebel against colonialism after World War II (not to mention the great Tony Soberanis in 1934) have to be given maximum, maximum respect. Anti-colonial Belizeans produced leaders such as Leigh Richardson, Goldson, George Price, Albert Cattouse, Lindy Rogers, and so on. The problem for a leader of an oppressed people is that the oppressor is always offering such a leader an easy way out, if that leader makes deals with the oppressor, thus selling out his struggling people. A leader of oppressed people who sells out his people is considered a success, worthy to be praised, in the world of oligarchy. Consider Ferdinand Marcos, Francois Duvalier, Rafael Trujillo, Jorge Ubico, and the like. They lived big: their people suffered.

A man who has aged, like myself, has to be careful about comparing eras. But, I will maintain, apart from the standpoint of being a majority ethnicity back then in the 1960s and the 1970s, black youth were in a better situation then than now. Straight frigging up. Mind you, black youth did not believe we were in a good situation. We wanted to get the hell outa here. I always quote Brook Benton: we got what we wanted, but we lost what we had.

So who is to blame? Which of our leaders messed up? This is the third column in a row I’ve been looking at things over the course of my lifetime. I believe I have some credibility here, because I never allowed myself to be compromised by either the PUP or the UDP. I was up close and personal on several occasions when PUDP won elections, but I did not involve myself in the spoils: I always walked away. The main reason for that was not because I am any kind of saint: the reason was my respect for the UBAD legacy. Black youth can’t blame me for what has happened to our people. I think we have to look inside the two major political parties, deep within their leaderships.

Featured photo: Mr. Goldson is second from right in the front row of this photograph of the UDP Belize City Council candidates who demolished the incumbent PUP in December 1983 CitCo elections. UDP Leader, Rt. Hon. Manuel Esquivel, is center front row, but he was not a City Council candidate in 1983. (He had become UDP Leader in January of 1983.) Missing from this photo is the late Derek Aikman.