I must go down to the seas again, to
the lonely sea and the sky,
And all I ask is a tall ship and a star
to steer her by;
And the wheel’s kick and the wind’s
song and the white sail’s shaking,
And a grey mist on the sea’s face,
And a grey dawn breaking. 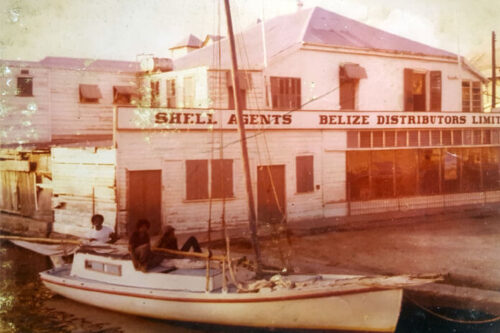 The aging photograph above is of the sloop Aventurera, as she was getting ready for the 1978 Baron Bliss Day Regatta. The photo was loaned to me on Sunday morning by Bobby Meighan, a member of the Yarborough Bridge Meighan family which bought Aventurera from its Caye Caulker owners sometime in the 1970’s.

Bobby Meighan is the son of the late Rudolph “Scientist” Meighan and his wife, Myrna Belisle Meighan, who is my late mom’s first cousin.

As I told you a few weeks ago, the legendary sloops Estrella, Cruzita, and Aventurera were originally owned by the Rodriguez, Marin and Alamina (not Alamilla, as I had written; correction by Paul of Belize) families of Caye Caulker.

For my Easter 2021 column, I decided to reproduce some sailboat racing material from pages 150-152 of my Sports, Sin and Subversion, originally published in 2008. Here goes:
In yachting, Buck Belisle brought me out as one of his “heng-kin-dola” crew members when I was about 40 years old. This “heng-kin-dola” business means you lean out from the side of the boat over the sea to balance business when the wind is strong. The story behind that was like this. My dad, who loves sail boats, got tied up with boat designer Gilly Usher around 1986 or so. They decided they were going to beat Dean Lindo and his Ina L, a very successful sloop. But my dad doesn’t like to spend money, and I wasn’t going to spend any of mine to race against Dean Lindo unless I was sure to be competitive.

My dad inveigled my uncle (Buck Belisle), who is the best race captain I ever saw, into sailing the Incredible, but the boat was inadequately rigged. The mast broke the day before the race. Lindo’s boats are always super-rigged, and my uncle was made to look bad.

Following that debacle, my uncle came to me and asked (told) me to be his partner in a Seagull, Key Card, to race against Lindo’s entry, Sea Gal, in that class. Lindo beat us badly the first year, but then we had Arthur Belisle re-design our ‘gull. My uncle gave Santi Castillo specifications for a jib to order for us, with Santi’s logo. We won 9th of March the following year, and began to dominate the class.

The year after, when we were to defend our title on Baron Bliss Day, the “gentlemen” of the Regatta acted like some cads, in my opinion. So I quit the sport. Here’s what happened.

Yachting had become a sport dominated by just a few boat owners — George Brown and Dean Lindo in the sloop class; Brown, Lindo and Eckert Lewis in the dories; and Collet Maheia among the sailing lighters. In the old days, boys had grown up sailing little board boats with grape leaves against each other in the canal, while Gales Point Manatee and Mullins River, 18 and 27 miles south of Belize City respectively, were fishing and sailing villages where sailing, which is both a science and an art, was a rite of passage to manhood.

When I was a child growing up, it was still all about sailboats. There were boats with internal combustion engines, like the tugboats which hauled logs or barges, and the passenger and cargo boats which plied the coast. But there were no outboard engines and speedboats when I was a child. That was something that started to happen when lobster fishing became the action in the middle sixties.

While the sailing tradition in Belize is one which has faded badly, the idea of having the fastest and most maneuverable boat was central to the whole idea of piracy, and remember, the settlement of Belize in the Bay of Honduras was founded by buccaneers. The famous defence of the settlement in 1798 was accomplished with sailboats. There is history involved with the 9th of March Regatta, but by the 1980’s, time was passing the sport by, and both the boat owners and the committee men were a closed fraternity. The boat owners employed mostly “Manantee” men to sail and crew their boats.

Buck Belisle was a charter member of that sailing fraternity who was now participating as a Seagull owner. His crew members were his cousin, Karl Belisle; his youngest son, Dean Belisle; and yours truly, his nephew.

I supported my uncle instead of my dad, because my dad is an intellectual. He loves ideas and concepts. My uncle is a gambler who places the gambler’s premium on victory. By the middle 1980’s, I couldn’t afford to mess around with ideas and concepts. I’d gotten enough of being a good loser.

One of the things I regret in my life was what happened between Dean Lindo and myself between 1972 and 1979. What can I say? Buck Belisle and Dean Lindo are first cousins, former Unity Club teammates, and men who have a great admiration for each other. I don’t believe what happened that 9th of March was Lindo-promoted. But he went along with the program.

That Baron Bliss Day in 1988 or 1989, when Key Card was to defend its Seagull title, the weather was so bad in the morning that the committee men called off the Regatta. But the weather suddenly began to clear around 11 a.m. or so, and the committee announced on Radio Belize, then the nation’s only radio station, that they would proceed with the races. This announcement took place around 12:15 or 12:20 the afternoon.

Key Card got out late from Buttonwood Bay for the race start in front of Fort George Hotel. The committee and our competitors saw us coming, and started the race anyway. The head start was too great: we couldn’t make it up. Buck Belisle was all about blaming C. B. Hyde for not towing us out in time, but I thought the yachting people were chicken s—t. The original cancellation meant everything had become somewhat up in the air. Plus, in sports the defending champions is due a little courtesy, but I’d seen too many strange things since UBAD. It always happens to me. I walked.

On Sunday morning when I checked my e-mail, I saw that Elma Whittaker Augustine had mailed me the day before to say that her...
Read more
Publisher

A few months ago, I discussed the incredibly sensational case of a wealthy, prominent Belizean who in some respects was a he-man in behavior,...
Read more
Publisher

“Like the Freemasons, the Confederacy of the Humbled is a close-knit brotherhood whose members travel with no outward markings, but who know each other at...
Read more
- Advertisment -