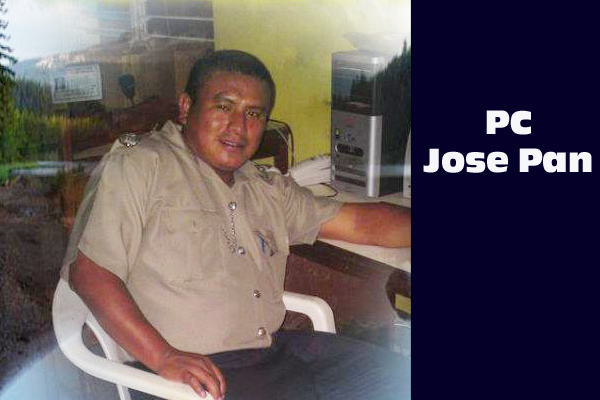 His wife said that he had told her of his frustration with his job, but the Police Department said he never complained

Constable Jose Pan, 25, of Jalacte Village, was found on Tuesday evening, April 23, in the kitchen of his house on the upper flat of the police station with a gunshot wound to the right side of his head. He was taken to the Southern Regional Hospital, where he died at about 10:30 that Tuesday night, while receiving medical treatment.

Police reports are that at about 6:45 that evening, they responded to a report of a suicide at the Gales Point Police Station. They went to the station and found P.C. Jose Pan in the kitchen of the living quarters on the upper flat of the building lying face up with a gunshot wound above the right ear (entry) and left ear (exit) in a pool of blood.

His police service revolver was lying at the right side of his body. The .38 revolver was loaded with five live rounds, and one expended shell was in the cylinder.

His wife, Simeona Pan, 30, told police that Jose left home at about 11:00 a.m. and went into the Gales Point Village and returned at about 5:00 p.m. under the influence of alcohol; at that point, she said, he expressed frustration with his job to her, and lay down on the floor.

She then went into the bathroom to bathe their 2-year-old son, and shortly after, she heard a loud bang. She rushed out to see what was happening, and saw Jose lying on the floor in a pool of blood. He was transported to the Southern Regional Hospital, where he was pronounced dead at 10:35 p.m.

Police Press Officer, Rafael Martinez, told Amandala today that Pan had not mentioned any difficulties or voiced any complaints to the Police Department, and they are at a loss as to why he committed suicide.

Moreover, he had told them that he loved the village, and he was raising funds along with the village chairlady to provide a good water service for the villagers. The villagers said that he did all he could to help the community, allocating time to go to the school to ensure that the children were well and safe.

Constable Pan was also active in the community in other ways — assisting in conservation and going into the field. The villagers said that they were expecting him to be around for a long time, and are at a loss as to why he would kill himself.

The death has officially been ruled a suicide. Rafael Martinez, Police Press Officer, announced that Constable Jose Pan will be buried with full police honors in his hometown village of Jalacte at 11:00 a.m. on Sunday, April 28.