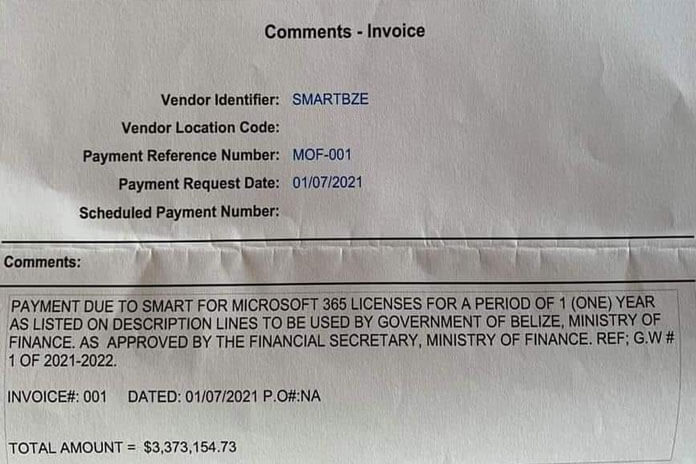 BELIZE CITY, Thurs. Aug. 26, 2021– Evidence has emerged that there is greater momentum behind a government shift away from the services of the nationally owned telecommunications company (BTL) and towards the Briceño/Ashcroft-affiliated Speednet Communication Ltd. (SMART) than was previously thought. The reassurances from the Prime Minister, Hon. John Briceño, that the replacement of BTL’s services with those of SMART within certain ministries was just isolated instances of public servants seeking cheaper mobile plans were barely out of his mouth when documents surfaced that revealed the awarding of a multi-million dollar contract to SMART for the provision of software to the entire government. Specifically, the documents show that GoB awarded SMART a BZD $3.3 million contract for the provision of Microsoft 365 licenses to the government — a contract previously held by Belize Telemedia Limited.

One of the documents which emerged was a Smartstream invoice (dated July 1) in which a request was made for the payment of $3.37 million to SMART Belize for the provision of Microsoft 365 licenses. The other document is an invoice (dated August 9) which indicates the approval of a payment of $3,373,154.73 to SMART by the Ministry of Finance, which is headed by Prime Minister Briceño (who just days ago, passionately denied being privy to any decisions to switch to SMART services), as compensation for the provision of one year of licenses for Microsoft 365 software to GoB. The contract, which was previously held by Digi, was awarded to the privately owned Speednet Communications Ltd. after a selective tendering procedure involving three companies: Belize Telemedia Limited’s Digi, which is in fact the authorized Microsoft silver partner; a Caribbean-based Microsoft partner since revealed to be Inova Solutions; and SMART Belize, a non-Microsoft partner which only has the rights as an authorized reseller. Interestingly enough, of the three bidders, it was the company that is not an authorized Microsoft partner — SMART— that was given the GoB contract to provide the licenses.

The bidding was reportedly set into motion sometime in early June when an official from the Central Information Technology Office (CITO) advised DIGI to submit its three-year bid with a deadline fixed for June 18.

A leaked internal memo from DIGI, issued from the office of Belize Telemedia Limited’s chief executive officer, Ivan Tesucum, states, “The details below provide a sequence of events which in our view demonstrates that to accommodate a last-minute non-Microsoft Partner [SMART] the goal post was moved and set up for Digi to not win the renewal.”

During a press conference this week, the chairman of BTL, Mark Lizarraga, said that the company lost the bid to SMART, which supposedly offered a lower price. The memo from CEO Tesucum states that SMART did not provide a three-year best pricing offer but was still ultimately awarded the contract. DIGI offered a three-year price of $9.29 million BZD, while the Caribbean company Inova made an offer that carried a $9.84 million price tag.

Digi’s one-year offer was $3.09, with an $80,000 free value-added package of support and training, which, according to BTL’s CEO, made it the cheapest bid to GOB. Inova offered a price of 3 million dollars and SMART offered a price of $2.95 M, which would at first glance have the appearance of being marginally lower, but which, because it did not include the additional features contained in the other proposed packages, was arguably, according to CEO Tesucum, not the lowest bid. It was SMART’s bid, however, that ultimately was chosen by GoB.

The Digi memo goes on to state, “Digi offered to offset 50% or over $1.5 million of the licenses renewal cost against dividends owed to the Government of Belize to ease the cash outlay of GOB” — an offer that should have brought great relief to a cash-strapped government which PM Briceño claims is focused on savings. (It’s worth noting that the Ministry of Finance invoice indicated that payment of $3.37 million was to be made to SMART Belize immediately.)

A release from the Government of Belize is claiming that the three bids were password-protected and opened in a meeting where all three bidders were present along with the Central Information Technology Office’s chief information officer, Ian Smith, and Artemio Osorio, the Ministry of Finance’s procurement director.

The release from GOB says, “The Smart bid was lower than that of BTL and Inova Solutions, and the Bid Evaluation Committee recommended to the Ministry of Finance that Smart Belize be awarded the contract. The ministry accepted that recommendation.”

“The process was open, transparent, and fair. There was and could not have been any interference, since all three bids were password-protected. The entire tendering process was handled by CITO without interference,” the release claimed.

Whether claims of password protection are anything other than moot in a community such as Belize where there are so many information channels connecting persons at the highest level of government with the companies making the bids— is a question that lingers in many Belizean minds.

Just recently, the Briceño administration came under fire for the transfer of cellular services inside various ministries from Digi to SMART. Both the Prime Minister and the Chairman of BTL, Mark Lizarraga, have said that the move was strictly business; however, the possibility of unfairness in the process, which could have been engineered to favor SMART, has caused some public outcry. The Belize Communications Workers Union recently issued a press release that called such decisions “spit in the face of all Belizeans”.

The UDP leader, Hon. Patrick Faber, hosted a press conference yesterday at which he called for the resignation of Lizarraga from his post as chairman of BTL.