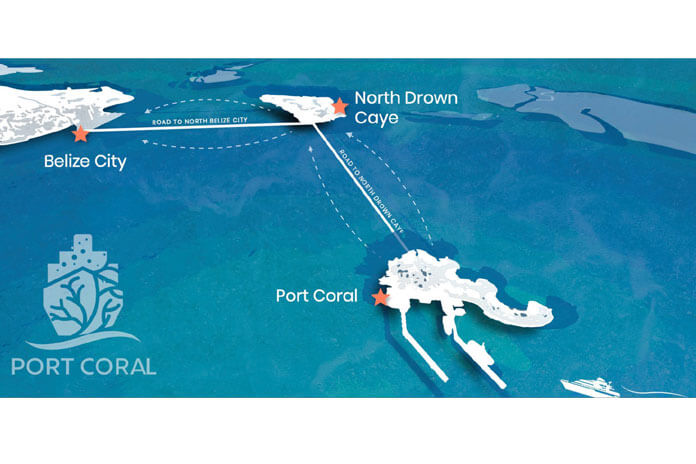 BELIZE CITY, Wed. Oct. 13, 2021– A huge amount of intrigue and questions currently surround the issuance of a 2019 Environmental Compliance Plan which grants approval for the construction of causeways connecting the Stake Bank project’s Port Coral cruise destination to Belize City. First, there were doubts about whether such a document even existed — until this week when the Chief Environmental Officer, Martin Alegria, held a virtual press conference, during which he waved the purported document in front of the screen, even though he would later evasively say that he would “try” to scan the public document when asked for a copy of the ECP by 7News’ Jules Vasquez, who reportedly has not received the crucial document.

The questions that have arisen since Alegria’s purported discovery of the ECP among files which he said was misplaced during a move of the Ministry of Sustainable Development to another office and the press conference at which he brandished the document, are who issued the approval, and when. Former UDP Cabinet ministers who were at the helm of key ministries when the ECP was issued have disavowed the issuance of any such approval, and even members of the Environmental Appraisal Committee headed by Alegria have claimed that no approval was given for construction of the causeway at any meeting they attended. In fact, in 2017, the minister in charge of the Cabinet investment sub-committee at the time said that they did not give their consent because public consultation was necessary. The sequence of “It wasn’t me”’s from all the other persons who should have played keys roles in the approval process have left one man in the public spotlight as the person who gave the green light for the building of the causeway, in what many are starting to believe could have been a unilateral move.

Last week the UDP, who were the ruling administration at the time of the issuance of the supposed approval, released a statement emphasizing that the only ECP approved was for the development of the 16-plus acres of the island itself, and that no causeway was approved for construction at that time.

Chief Environmental Officer Alegria, however, is now asserting that causeways for both the Stake Bank Project and the North Drowned Caye Project were ultimately approved by the NEAC after meaningful input from the general public. He said that at the time of the Environmental Impact Assessments (EIA)s for both projects, which can be traced all the way back to 2007 (when he claims that public consultation was done), the causeways were listed as a part of the development, and subsequent ECP’s that were issued in 2013, and thereafter in 2019, simply affirmed or reinforced that initial assessment, since a stock-taking exercise by the NEAC revealed that what was outlined in subsequent proposal documents was virtually identical to what had initially been proposed.

In describing the process which preceded the initial granting of approval for the causeways in 2007/2013, Algeria said, “There were discussions for and against. And one of the issues that were always out there with those projects was the causeway or the causeways, because each project had a causeway, each EIA had a causeway proposed. And so those discussions were held in 2006/2007 where the NEAC at the end of the day, when they reviewed all of the meaningful inputs from the general public from an environmental perspective, was of the view that a causeway can be approved and permitted and hence in 2007, the ECP for North Drowned Caye include the causeway. The ECP for Stake Bank did not, but it’s not because NEAC did not approve it, it was because there were complications that the investor and the N.G.O. community had with the Swallows Caye.”

Those complications had to be resolved before final approval from the NEAC could be handed down and, according to Algeria, that discussion dragged out, due to what was believed to be some differences between the investors and the management at Swallows Caye.

He said that the causeway was still approved by the NEAC.

“By the time the chief was ready to sign the ECP, it was too late to include it, because things were not resolved or the precondition upon which NEAC had granted it the go-ahead – and that was to take Swallows Caye into consideration and work with them so that you have some kind of amicable solution. But the causeway itself was an issue that was discussed, debated. Of course, it was contention, but in the end, the NEAC approved the clearance of those causeways.” Alegria said.

The question remains, however: how was this major project approved without the blessing of the UDP Cabinet?

Alegria’s former boss and previous Minister of the Environment, Dr. Omar Figueroa, called the assertions by Alegria beyond amazing, and told local media in a statement that he had no knowledge of the existence of the ECP.

He added that he personally told the Chief Environmental Officer that the Cabinet’s 2017 directive was that no decision could be made without first conducting meaningful consultations and without final approval from the then Cabinet.

“I would like to make it absolutely clear that I had no knowledge of the existence of this ECP. In fact, this could not have surfaced under the previous administration because I personally informed the Chief Environmental Officer that Cabinet had issued a clear directive regarding this. No decision could be made without first conducting meaningful public consultations, and without the final approval of the then Cabinet. It is beyond amazing that such a major ECP could remain top secret for over two years. Minutes of the NEAC meeting where approval was authorized should be made available immediately. Several NEAC members cannot recall any such meeting. The emergence of this secret ECP underscores the importance and need for the legislative amendments that replaced the chief environmental officer in his role as chair of NEAC,” Figueroa stated.

As mentioned in Figueroa’s statement, he and the media have called for the minutes of the NEAC meeting at which the ECP was allegedly approved to be released to the public, since several members of the NEAC have said that they do not recall that such a meeting took place.

The release from the UDP stated, “The Cabinet has taken a firm position that ay potential approval of these causeways would only be considered after the revision and update of the EIA which would include a robust round of public consultations on this specific component.”
It adds, “If there exists a signed ECP for 2019 or the construction of these two causeways, it had neither the knowledge nor the input of the Ministry responsible for Environment and would have been executed against the recommendation of the Cabinet Sub Committee on Investment, the Ministry of Environment, and the clear directive from the then Cabinet.”

Alegria, when pressed by reporters on what the position of the Cabinet was at the time of the issuance of the ECP, said that he was not privy to the discussion done in Cabinet. He said that since the EIAs that were first approved and legitimized in 2013 were still valid, the DOE was simply tasked to do a stock-taking exercise to ensure that nothing had changed in the project or within the environment of the project area.

“From an environmental perspective they viewed that a causeway can be approved and permitted and hence in 2007, the ECP for North Drowned Caye included the causeway. In 2013, these 2 projects revived again. It was 6 years after the approval of 2007 that the investor came back and said he is reviving his project. In 2013 the NEAC deliberated and ask for what we called stock take exercise into an addendum. They say go back, look at the EIA, the proposed development plan design layout that you have see if it is the same that you are proposing now. In the case of when the stock take exercise in the addendum that was sent to the NEAC in 2013, North Drowned Caye was right there, and it’s isolated, so very little had occurred or changed in the environment. The proposal that is being proposed at the time 2013 is identical to what was approved by NEAC in 2007, so the NEAC reviewed and said, well in this case we can go ahead and basically signed new ECPs for this, because there is no difference of what was approved by NEAC in 2007 to what is being requested now,” he said.

Alegria said that according to the legal advice received by his department, a new EIA, as was being requested by the then Cabinet, was not necessary, since the ones approved in 2013 remained the same after revision in 2017. He mentioned little on the signing of the 2019 ECP.

“According to the Chief Environmental Officer the approval of ECP for the Stake Bank Project was signed by himself on the instructions of NEAC without the consideration of Cabinet. I have never heard such crap in my life,” former Minister of State in the Ministry of Investment, Tracy Panton (Albert area rep), remarked on her Facebook page.

For now, the UDP is calling for a revocation of the ECP that it says it did not approve. The Chief Environmental Officer, Martin Alegria, has said, however, that according to legal advice he has received, ECPs are for the life of a project and only require an update if the lag in start time is not properly justified.

The Prime Minister, Hon. John Briceño, when questioned by local reporters, said that his administration is now taking a look at the procedures that were carried out to determine whether the department followed the required process.

The ECP, which is a public document, is not listed on the Department of the Environment’s website, unlike many other public documents regarding projects of national environmental interest. Alegria said that its absence from the website is necessary to protect the signature of investors who signed on the ECP so that the exposure of their identities does not subject them to unjust treatment.