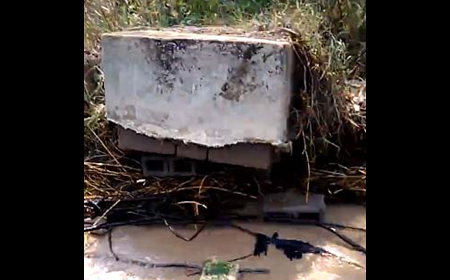 BELIZE CITY, Thurs. May 4, 2017–The entire Belize City will be submerged by an encroaching sea in under 7 decades. That was the initial reply from Director of Health Services (DHS), Dr. Marvin Manzanero, when we contacted him today to ask what, if any interventions, can be done to help the community of Monkey River, grappling with shoreline erosion which now threatens to wash away the community’s cemetery, where villagers are still being buried.

Whereas climate change is forecast to submerge many islands and seaside communities around the globe in the decades ahead, the community of Monkey River—like no other seaside community in all of Belize—has been seeing their village of approximately 250 residents shrink over the past 20 years, but the erosion has been much more aggressive in recent years, and since February of this year, the encroaching seas started to eat away at the community’s cemetery.

Leonardo Castro, vice chairman of the village, told Amandala that erosion has submerged their football field and the main street, and has now made its way to the grave of Vida Arzu, who was buried there in the 1990s.

On Tuesday, May 2, Jessica Cuevas posted some photos and videos on Facebook of what has been happening to the village graveyard, decrying the lack of government intervention to address the problem.

“…We have to move our grandparents’ remains. If you have your family here, you should be worried,” she said.

The DHS warns, though, that graves should not be exhumed without the right procedures being followed, firstly because there are laws that have to be followed and secondly to safeguard against the wrong remains being dug up. He told us that the police ought to be informed and a permit is required for exhumation of bodies for reburial at new locations. He also noted that there could be legal implications and penalties for violations.

The DHS told us that they have been aware of the erosion problem in Monkey River, and he undertook to liaise with Public Health officials of Stann Creek, who may have been looking into the matter, and he will provide us with an update at a later time.

“We would need to look at what can be done for each individual grave,” said Manzanero.

Castro told us that the adverse impacts of erosion have been massive over the years.

“There have been over 20 lots lost and over 15 houses. Right now, we have four or five houses immediately threatened by the erosion,” Castro said.

At the burial ground, it is just hitting the first tomb, he said.

According to the vice chairman, they started to observe the encroachment there just a few months ago, around February.

Before erosion struck this part of Monkey River Village, the main street and a football field separated the burial site from the beach. Today, all that has been lost. The football field was lost about 5 years ago, he said, and then the front street was lost last year.

The erosion has displaced over a dozen families, and one elder is living in a house which stands partly over the water. That elder is Claude Murray, who had moved to that location 7 years ago because erosion had displaced him from another location in the village. Evidently, he will have to move again—despite a drive initiated on his behalf last September—One Sand Bag at a Time—to help save his home. The Belize Social Security Board and the Belize Electricity Limited were among the agencies which contributed to the cause to provide sandbags. Castro said that despite the outpouring of support for Murray, the intervention has not really stopped the problem.

“It is very frustrating to have to live through this,” said Castro, whose sister has also been displaced, and who now faces growing concerns that they may meet the same fate again.

As for the cemetery, Castro forecasts that, “…within a year won’t have it for sure!”

There is talk now about the need for the remains of loved ones buried in the village to be relocated.

“We would probably have to look at land on the north side of the village…” Castro suggests.

Some of the villages feel that they have been abandoned by their political leaders on both sides of the political divide.

They are still hoping for intervention from official circles, but for now, villages on the Monkey River basin have put their hands to the wheel to try to address the menacing problem.

The Monkey River Watershed Committee, comprised of people from 10 villages from the watershed, such as Bella Vista, Trio and Monkey River, was recently registered. They are asking for funds for Monkey River, and they recently received funds from the Protected Areas Conservation Trust (PACT) to help combat the erosion and to lobby for aid from the United Nations Development Program (UNDP).

It is community effort that’s making the difference now; they have been trying to seek out engineers to see what the best solution is to address the problem, Castro said.