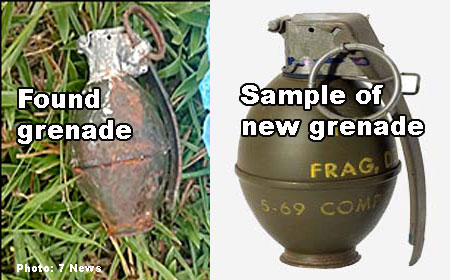 BELIZE CITY– An American-made grenade, identified as an M62, was found, along with a .38 Special Revolver, in a black plastic bag at about 10:00 a.m. yesterday, shortly before the 10th September Parade commenced.

The grenade was found by police who were conducting an operation in the area of Mayflower Street, and was safely recovered by BDF bomb experts, without any incident.

Senior Superintendent Edward Broaster, Deputy Commander of the Eastern Division Police, in an interview at the Racoon Street Police Station this morning, said that he and Brigadier General David Jones, Commander of the Belize Defence Force, were at the 10th September ceremonies at the Memorial Park when he got a call that a grenade was in the area of Mayflower Street, and they immediately went into operation to recover the grenade.

A search of the area was carried out, and shortly after, the grenade was found in a black plastic bag, in an overgrown abandoned lot in the Mayflower Street area.

People in the area were evacuated, and the Brigadier General went in and recovered the grenade, which was then handed over to police.

This highly lethal weapon was found less than 4 days after another grenade, of the fragmentary type, was found on Saturday morning by police who were conducting operations in the Banak Street area at about 1:30 Saturday afternoon, September 6.

Police are still investigating to determine the source of the first fragmentation grenade.

Broaster said that he did not believe that the grenade would have been used against 10th September revelers, but against rival gangs.

On September 8, 2008, a fragmentary grenade was thrown into a large crowd of people in front of the Karl Heusner Memorial Hospital, who were watching the Carnival Road March, but luckily, the powerful weapon did not explode. The grenade was recovered by a BDF bomb expert, who was also watching the carnival in the area at the time. It was found to be a British-made grenade.
Broaster said that the grenade found yesterday is more powerful than the fragmentation grenade found on Saturday. Its origin is yet unknown, but these types of grenades, he said, are widely used by Central American military forces, including those of Guatemala, which has a porous border with Belize.
In May 2004, thieves breached the security of the British BATSUB ammo depot at the Airport Camp Military Base, and broke into the room where the grenades were kept, and 24 of the weapons were stolen. Over the years, 20 have been found through investigation, or were recovered after being thrown.
At about 7:15 on the night of December 29, 2008, a grenade thrown into a yard on Kraal Road exploded. Rudolph Flowers, 14, was killed immediately, and two others, Leon Williams, 28, and Kenneth Barrow, 32, were injured.
Police believe the grenade attack was due to the ongoing rivalry between the George Street and Kraal Road gangs.
Also, the grenade was a British-type fragmentation grenade, one of 24 of the type of grenades that were stolen from BATSUB in 2004.
A similar incident had occurred previously, on May 18, 2008, when a grenade was thrown on Mayflower Street. The blast impacted the surrounding structures; 12 people were seriously injured and Darren Trapp, 16, was killed.