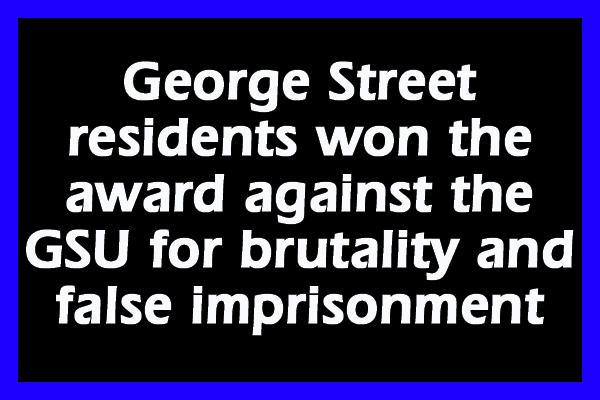 On August 26, 2011, a little after the 6:30 evening news ended, members of the Gang Suppression Unit (GSU) besieged George Street and descended in droves upon its residents as they were engaging in the repast following the funeral of Charles Woodye.

The residents, most of whom are believed to be members of the George Street Gang (GSG), reported to police that they were terrorized by members of the GSU, who stormed their houses and began beating, kicking, and punching them, then smashed the bottles of liquor they had there for the repast.

The following Monday, August 29, the bruised and battered residents went to the media to let the entire country know of the abuse they suffered at the hands of the GSU.

And in those interviews, they also vowed legal action against the officers because of the injustices that were visited on them, an injustice that they claimed was totally unjustified.

The matter received so much attention that it warranted the return of the Prime Minister, Hon. Dean Barrow, from a diplomatic trip in order to quell the rising anger of the residents, and temper the situation via mediation.

Carlos Abraham, Gerald Tillett and Zane Galvez were among the thirty-plus residents who were abused and terrorized that evening, and who also, along with 16 other residents, brought a lawsuit against the GSU, and in essence, the Government of Belize, on charges of police brutality and false imprisonment (they were detained for 62 hours before either being charged or released), or both.

The matter went to court, and finally, this morning before Chief Justice Kenneth Benjamin, after months of seesawing between the government’s attorney, Herbert Panton, and the two attorneys — Kareem Musa and Anthony Sylvester — for the 18 George Street residents and Zane Galvez respectively, the three were able to settle on a figure that seemed reasonable to Musa and Sylvester.

That figure amounted to $205,000 that the claimants have to divide among themselves, and the formula used for dividing the payment is as follows: those who suffered abuse from the police will get $12,000 each; those who were wrongfully imprisoned will get $5,000 each.

That formula, however, is only for the 18 George Street residents; Galvez, who had his arm crushed by a policeman’s baton, will be compensated with $30,000.

The payout should be disbursed in two dividends – the first this month, the other sometime next month. But before the pockets of the claimants get heavy from their hefty payouts, the lawyers will convene at the court next week for a final report, since the financial secretary has to first sign off on the issue.