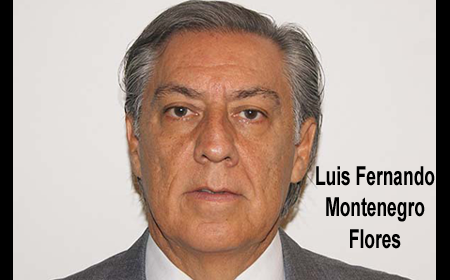 BELIZE CITY, Wed. Apr. 19, 2017–It was confirmed this week that there is a lobby in official circles in Guatemala to have that country’s map for public and private use formally include Belize.

Three weeks ago, news broke that Guatemala’s Ministry of Foreign Affairs had received a provocative proposal via one of its consultants, Edmundo Rene Urrutia Garcia, which made reference to suggestions that the country of Belize should be included in Guatemala’s map, apparently with annexation of the Sarstoon. Garcia also referred to a proposed public consultation on the oil exploration in Belize’s subsoil.

Evidently, the suggestion did not end there. On Tuesday of this week, April 18, Guatemalan Congressman, Luis Fernando Montenegro Flores, tabled a proposal in Guatemala’s Congress, the country’s unicameral law-making body, to have Belize included on the map of Guatemala with a punctuated line carrying a notation that there is a territorial, insular and maritime dispute pending settlement, but furthermore, carrying a notation that the border with Belize is not defined.

The proposal went on to suggest that both private and public institutions in Guatemala which use the country’s map should be required to use the version that includes Belize.

Montenegro’s proposal was overwhelmingly voted down in Guatemala’s Congress, with 84 votes against and only 26 votes for.

A report carried by Soy502.com said that Congressman Mario Taracena Díaz-Sol, former president of the Congress, opposed the proposal before Congress, saying that the legislative body should not be involved in foreign policy. He also asserted that such a matter is within the purview of Guatemala’s president, Jimmy Morales, who he said is the chief of that country’s foreign policy directorate. Furthermore, the Congressman warned that Belize could raise an international protest against such a move to include the country on Guatemala’s official map. 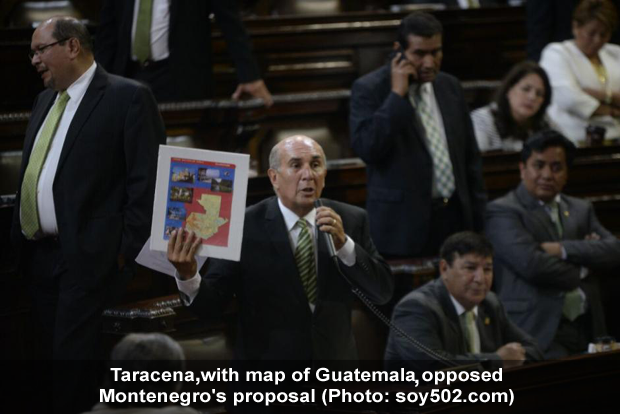 Although maps have been circulated before in Guatemala with Belize included, the imprimatur from Congress with annotations on the territorial differendum and a statement disregarding Belize’s borders would have been a first.

Back in 2013, Belize publicly protested a move by Guatemala to print passports which had its border with Belize marked by only a broken line. Subsequent to that controversy, we saw a woman at a Belize City business with copies of the said passport for photocopying. At the time, Belize officials denounced Guatemala’s move as “provocative and retrogressive,” as the passports were intended to depict Belize as a part of that territory, with the western border between the countries represented by just a dotted line.

In February 2013, a map of Guatemala which purported to annex Belize was used by a Guatemalan official at a meeting of the Organization of American States. He claimed that the map had been inadvertently used, but it was obvious that there was a move in official circles to annex all of Belize to Guatemala—not half of Belize, as popularly said, as there was no suggested delineation at the Sibun River.

Ministry of Foreign Affairs sources have told us that the Guatemalans have signaled that they plan to hold their referendum this September on the question of whether Guatemala should submit any and all claims it intends to advance with respect to Belize at the International Court of Justice (ICJ) for a final and binding decision.

We note that Guatemala’s exact stance—half of Belize, south of the Sibun River; or all of Belize, from the Rio Hondo to the Sarstoon River—has not been put in writing, although the ICJ agreement was signed over 8 years ago, in December 2008.

Belize does not intend to hold its national referendum on the ICJ question until after a reregistration exercise is carried out, and no date has yet been announced for the vote here.