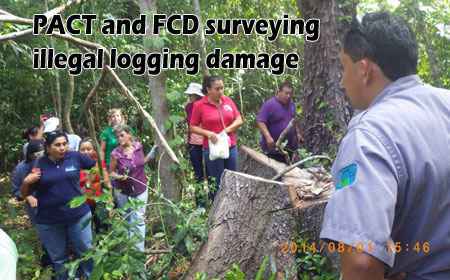 BELIZE CITY–Incessant illegal encroachments by farmers from Guatemala into the Chiquibul Forest, and particularly the Chiquibul National Park and the Caracol Archaeological Reserve, could be exacerbated by the worsening drought in the neighboring country, which has forced the declaration of a state of emergency, amid reports that Guatemalan farmers are not just expanding slash-and-burn clearings in the verdant lands of western Belize, but are actually marking survey lines several miles into Belize and setting up illegal dwellings inside the national park.

“The survey lines contain pegs and are blocked off”

Rafael Manzanero, Executive Director of Friends for Conservation and Development (FCD), warns that, “The drought period in Guatemala affecting over 1 million, two hundred thousand people in 16 departments, have created a condition of food insecurity. This has prompted the Guatemalan Government to declare a state of calamity on the 25th of August among the 16 departments. In many of these departments, up to 80% of the corn product has been lost and it will take some 8 months to recover. The search for new lands for cultivations will become more incessant.”

“Joint forces targeted several plantations, but the effort to destroy them was overwhelming, even to the point of frustration, due to the sheer size of them and the inability to have much effect on the large fields with mere machetes,” said Manzanero.

The majority of these clearings were substantially inside Belize, spanning 44 kilometers (or about 27 miles) from north to south and more than 7 kilometers (and 4 to 5 miles) inland. 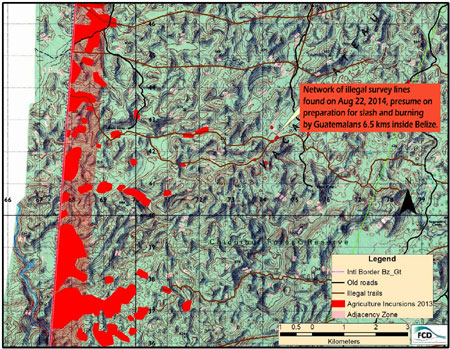 Furthermore, 9 homes were also discovered inside the national park, and Derric Chan, FCD Park Ranger, told us that most of them have to be destroyed.

Chan said that the homes, made from hardwood timber from the Chiquibul and covered with cohune or bay leaf, were apparently being used by the illegal farmers. He said that they also observed that the area around the homes had been cleared; there were areas set up for washing for dishes, latrine facilities and guard dogs.

Chan told Amandala that much of the new farms inside Caracol and Chiquibul were for the cultivation of pumpkins for seeds, locally known as “pepitos.”

FCD continues to underscore the urgency for official action to stave off the accelerating incursions.

“Based on a business as usual projection model, it was estimated that by 2015, a conservative estimated area of 5,734 hectares would be deforested and by 2035, the total deforested area would be 9,749 hectares in the Chiquibul Forest,” the FCD said.

Chan told Amandala this evening that he had conducted a fly-over earlier today, and he could see a very broad perspective of what’s been going on, on the ground.
He told us that last week, on August 21, they discovered a network of survey lines, with some new areas cleared some months ago.

Chan said that the situation is “alarming” as the clearings are now 2 kilometers further than what he observed two years ago, when survey lines were opened in the same fashion inside the Chiquibul.

We asked Chan: How can they be doing all of this with apparent impunity?

He told us that the area is very large and there is no road, no water. On the last ground mission last week, they confiscated two horses, but the six xáteros who had been in the area all escaped.