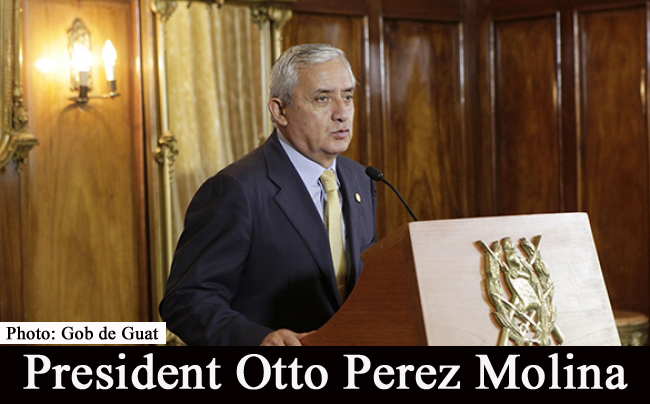 “The Commission on Belize is dissolved…”

“…both sides had assumed a positive outcome, meaning a ‘yes’ vote, in the referendum, and neither they nor the special agreement contemplated what would happen should voters disapprove of the ICJ route for resolution.”

Guatemalan President Otto Pérez Molina took a drastic measure last Thursday, February 21, when he disbanded La Comisión de Belice, an information/advisory agency on Belize matters which has existed inside the Guatemala Ministry of Foreign Affairs for more than 25 years, after an investigation indicated that it “neglected” its duty to inform their government of the 2008 change in the Belize Referendum Act.

The change in Belize’s law was no secret, as it was hotly debated in Belize’s Parliament and it was furthermore, the subject of fierce public litigation in Belizean courts.

Near the end of last month, January, Molina ordered an investigation into the proceedings of the Comisión de Belice, as they pertain to the question of settling the territorial differendum at the International Court of Justice (ICJ). He instructed that the results should be turned over to him within 15 days.

Last Thursday, after being apprised of the results of that investigation, Molina ordered the disbanding of the Comisión de Belice. The president has also ordered the establishment of a new advisory body on Belize matters and Guatemala’s Minister of Foreign Relations, Luis Fernando Carrera, announced administrative interventions to be made at the Guatemala Embassy here in Belize, which the investigation has also faulted with neglecting its responsibility to keep the Guatemala government informed, an official statement announced.

Belize’s Ambassador to Guatemala, H.E. Alfredo Martinez, indicates that public concerns have been expressed in Guatemala over the US$32 million which Guatemala has programmed to spend on the referendum, slated to be held simultaneously with Belize on Sunday, October 6, 2013, at which time voters would decide whether the dispute should be settled at the ICJ or not.

Some persons are concerned that all those financial resources, which could be better spent on social programs, would be wasted if the 60% threshold set out in Belize’s amended Referendum Act is not met, he explained.

“Our public response when asked, is that the whole thing was in the public domain and we took it for granted that they knew, so why make an issue of it? Besides, it is our sovereign law,” said Martinez.

The Guatemalan government claims it was unaware of the change made in early 2008—well before the signing of the ICJ special agreement—and it was only informally advised in 2011. Its informants are being reprimanded for allegedly neglecting their duties to keep them abreast of developments on the Belize front.

“The change in the Belize legislation, which introduced a requirement for (voter) participation of at least 60% to validate the result of the referendum, occurred during the 2008 negotiations—5 months before the signing of the Special Agreement at the OAS,” the statement added. (Guatemala’s law sets no minimum and the simple majority rule would apply.)

Chief Executive Officer in the Belize Ministry of Foreign Affairs, Alexis Rosado, said that Guatemala did ask Belize if there is any possibility of removing the 60% requirement from the act, but Belize indicated that it would not, and furthermore, explained that the changes to the referendum act were contemplated well before negotiations for the ICJ special agreement.

Rosado said that this is really a non-issue, since voter turnout in Belize is customarily in the region of 70%.

CEO Rosado said that this latest development has no bearing on the Belize-Guatemala differendum, as it is entirely an internal administrative matter for Guatemala.

Nonetheless, Guatemala’s official statement said that Molina is lobbying the OAS to use its offices to restore good faith relations between the parties, to pursue the objective set out in the special agreement, to resolve the matter via the ICJ.

Minister Carrera, appointed Guatemala’s Minister of Foreign Relations just over a month ago, announced at a press conference last Thursday that the governments on both sides of the border have committed in good faith to carry out the October 6, 2013, referendum.

However, he castigated the parties charged with the responsibility of keeping the Guatemalan government informed for not warning the country about the change Belize made in 2008, in its referendum act. Their failure, said Carrera, showed that they were careless in carrying out their responsibilities.

As a consequence, Carrera announced, la Comisión de Belice will be replaced. Given the political importance of the Belize issue, the President has decided to create a high-level advisory group on the subject of Belize, composed of ministers and political advisors, who will get legal technical assistance from a range of experts.

According to a statement from the Guatemala Ministry of Foreign Affairs, the simultaneous referenda are simply an avenue for achieving the objective set out in the December 2008 compromis (special agreement)—that is, to resolve the territorial, insular and maritime differendum between Belize and Guatemala via the International Court of Justice.

The statement said that both sides had assumed a positive outcome, meaning a ‘yes’ vote, in the referendum, and neither they nor the special agreement contemplated what would happen should voters disapprove of the ICJ route for resolution.

Ambassador Martinez said that on the Belize side, should the people vote ‘yes’, the referendum results would then be tabled in the Senate for ‘protocol passage’ before the Ministry of Foreign Affairs emits a ratification notice to Guatemala. On the Guatemala side, the referendum results would be transmitted through Molina’s office before going to the Ministry of Foreign Relations for the preparation of their ratification note.

Belize has already initiated its public education process; however, according to Ambassador Martinez, Guatemala has said it would hold out until three months before the referendum date to commence theirs. The referendum is due in just under seven and a half months.

Meanwhile, our newspaper understands that on the Guatemalan side, there is infighting over the ICJ process, and despite the ‘yes’ votes assumed by the compromis, very powerful factions are divided over whether the matter should even go to the ICJ.

There will continue to be bilateral meetings, via OAS channels, between Belize and Guatemala as the months ensue; however, we understand that a date has not yet been fixed for their next official meeting.