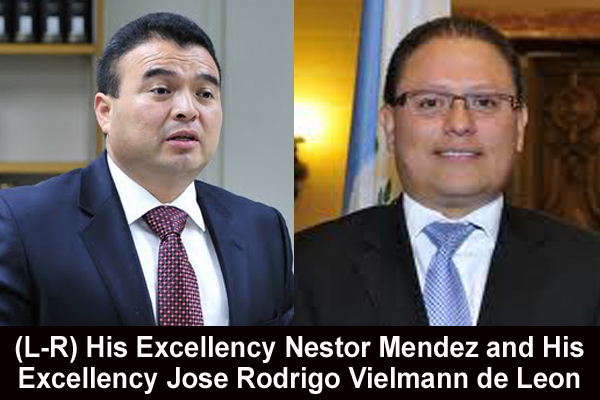 Belize Ambassador to OAS, Nestor Mendez, will formalize protest in writing to OAS

At a conference of the Permanent Council of the Organization of American States (OAS) in Washington on Wednesday, February 6, 2013, Permanent Representative of Belize to the OAS, His Excellency Nestor Mendez, protested against Guatemala’s use of an erroneous map of Guatemala that features Belize’s territory in the same color, as if Belize were a part of Guatemala.

The map, which has been used by Guatemala before, was shown in a video presentation by Guatemala Permanent Representative to the OAS, His Excellency Jose Rodrigo Vielmann de Leon. The map showed Belize separated from Guatemala only by a dotted line. The inference, obviously, was that Belize was a part of Guatemala.

Ambassador Mendez protested, for a second time, the use of the map.

Ambassador Mendez’s response to the use of the map was as follows: “When this video was shown in the general assembly in Bolivia, the delegation of Belize took the floor and protested the use of a map that shows Belize as part of Guatemala. Subsequent to that, we were assured by the secretariat that they would ensure that whenever this video was utilized again, that image would be removed.

“Everybody is aware that Belize and Guatemala have a referendum that is being dealt with under the auspices of the OAS. That hopefully it will be resolved at the International Court of Justice, but it is still not resolved. The use of this video and this image puts in serious jeopardy the process that we have undergoing with the good offices of the general secretariat of the OAS. And Belize cannot accept the use of that video.

“We protested it at the general assembly and we once again register our protest.”

Ambassador Vielmann responded to Ambassador Mendez’s protest and said, “Indeed, this protest was noted in Guatemala. The map shown in the video shows a dotted line as an adjacency line which both states recognize and use in the process of the territorial dispute.”

He then went on to say, “This intervention by the delegation of Belize allows me to recall the importance of the support of the Organization [of American States] in the process that we have undertaken and which was referred to by the Secretary General a few minutes ago in his report, in which both states have agreed to hold a referendum next October 6 to take the issue to the International Court of Justice.

“Well, Belize is not shown per se intentionally as a part of the territory of Guatemala, but as a reality we have a territorial dispute with a dotted line, and at no time does the State of Guatemala pretend to hinder the process, in which we have engaged for decades in a friendly and successful manner with the people of Belize and in which the Organization [of American States] plays an important role.”

Before the end of the meeting, His Excellency Nestor Mendez informed the Permanent Council that Belize will formalize its protest in writing via diplomatic note that “we find the use of that map totally unacceptable; it shows Belize and Guatemala in the same color, all the rest of Central America, all the other countries with a different color. The implication is that it is one territory. As we prepare to go to the ICJ, this provocative use of this map is not acceptable to my delegation and we will be formalizing our protest in writing.”