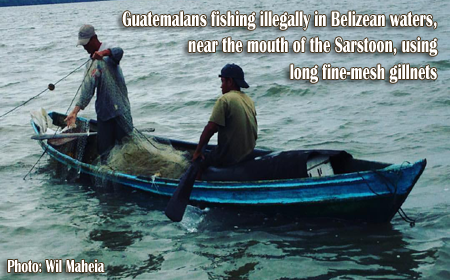 SARSTOON, Toledo, Mon. June 6, 2016–At this weekend’s summit of the Association of Caribbean States (ACS) held in Havana, Cuba, Belize’s minister with responsibility for fisheries said in his remarks to the 25-member group that the right of Belizean fishers to access our side of the Sarstoon for fishing is being violated by Guatemalans, whose military have been blocking Belizeans from entering the river.

At the same time, though, there are reports to our newspaper that Guatemalans continue to have free access to Belize’s side of the river, where they illegally engage in unsustainable commercial fishing practices with impunity.

Wil Maheia, founder of the Belize Territorial Volunteers (BTV), captured images of illegal fishing activities on the Sarstoon on Friday. We asked Maheia to indicate, out of 10 trips, how often he would see this kind of activity when he visits the area; he told us 10 times out of 10.

This time, there were two Guatemalans fishing in unlicensed and unregistered boats using as many as ten, fine-mesh gillnets—clearly running afoul of Belize’s fisheries laws. Even more so, the Guatemalans were fishing within a mile of the mouth of the Sarstoon. Maheia points to the fact that Belizean law forbids net fishing near the mouth of a river. The Guatemalans were catching fish and crabs, Maheia told us.

We furthermore note that the location where the fishermen were observed falls squarely within the boundaries of the Sarstoon-Temash National Park. Whereas fishing in the area is allowed, the scope of the gillnet fishing activities observed rings alarm bells.

Only last month, we reported on Oceana’s bid for a phased-out ban of gillnet fishing in Belize, because in their view the gear is indiscriminate and snags even protected species and juveniles, besides target species.

Ramon Carcamo, Fisheries Officer responsible for resource assessment and management, had told our newspaper that the Fisheries Department permits gillnets with mesh sizes above 3 inches and shorter than 300 feet. It is illegal for anyone to set gillnets at the mouth of a river or at a patch reef, he added.

According to Maheia, the nets which the Guatemalans were using near the mouth of the Sarstoon River on Friday were long and had a finer mesh than permitted under Belize law.

He said that the men were fishing within a mile of the Forward Operating Base (FOB) set up by Belizean security forces just this year to police illegal activities in the area.

Maheia said that when the FOB was opened, Government officials said they would police illegal fishing, but “absolutely nothing” has changed, “except that the fishers have more security now to protect them; if they get into accident, there is somebody there now to rescue them,” Maheia said.

Whereas it might seem trivial to be concerned about two men fishing in the area, Maheia said that each of those 10 nets usually catches between 50 and 100 pounds of aquatic life, sometimes more. There is no monitoring of catches by Guatemalans fishing without license on the Belize side of the Sarstoon.

The activities by the Guatemalans on the Sarstoon are classified as illegal, unreported and unregulated (IUU) fishing—a costly scourge which undermines sustainable fisheries around the globe. 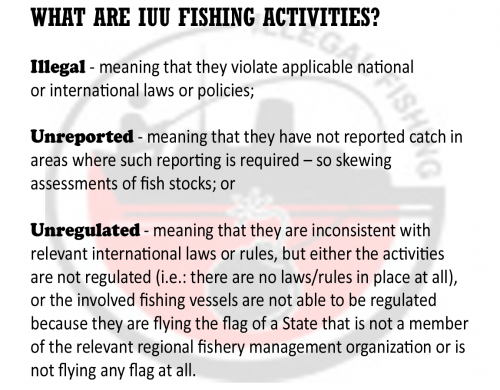 NOAA Fisheries notes that estimates from experts put the tab for the global value of economic losses due to illegal, unreported and unregulated (IUU) fishing anywhere from $10 billion and $23.5 billion annually, representing between 11 and 26 million tons. Oceans Unite says 20% of global catches are derived from IUU fishing.

“Illegal, unreported, and unregulated (IUU) fishing generally refers to fishing conducted in violation of national laws or internationally agreed conservation and management measures in effect in oceans around the world,” NOAA Fisheries notes.

“IUU fishing can include fishing without a license or quota for certain species, unauthorized transshipments to cargo vessels, failing to report catches or making false reports, keeping undersized fish or fish that are otherwise protected by regulations, fishing in closed areas or during closed seasons, and using prohibited fishing gear,” it added.

According to Oceans Unite, “Some of the world’s poorest people are hardest hit; communities totally reliant on local fish for food but without the means to police their seas can only watch the lights on the horizon stealing their fish.”