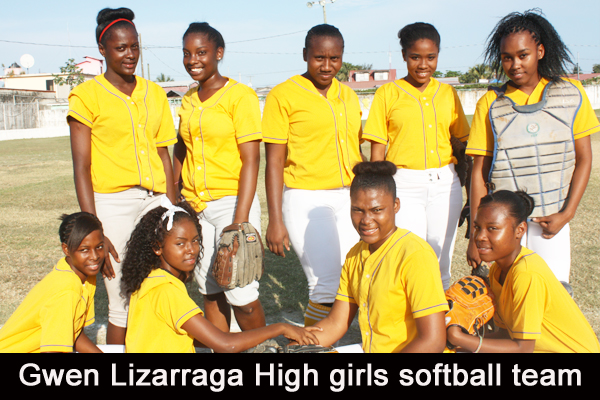 In Monday’s playoff first round, Nazarene High had gotten their first taste of defeat, when they fell to #2 seed Ladyville Technical, 6-5; and it was older sister Amber Wade on the mound for Ladyville Tech who took the victory over baby sister Elma, pitching for Nazarene.

#3 seed Gwen Liz girls had made light work of #4 seed Wesley on Tuesday, crushing them 15-4, so today they got their chance against Nazarene to earn a spot in the finals on Friday against Ladyville Technical.

Gwen Liz coach Madril confessed that his team lost to both Ladyville Tech and Nazarene in regular season games because he made some tough decisions with problem players, whom he promptly benched for coming to games late or not showing up at all. His biggest worry was having power pitcher Ashley Lucas protected by her reliable battery-mate Tyra Moreira. 9 players were needed to field a team and avoid a forfeit, and with the teams about to take the field, only 8 were in the Gwen Liz dugout. At the last moment, Tyra appeared at the Rogers Stadium gate, and that effectively sealed the fate of Nazarene High this evening.

Gwen Liz star pitcher Ashley Lucas was visibly “having a ball” on the mound today, as the nimble Tyra Moreira was behind the plate, and Ashley could “let it fly” without fear of the ball getting away. Nazarene hitters battled courageously, but were simply overpowered by the speed of Ashley’s pitches. Coach Alden Wade of Nazarene kept exhorting his batters to adjust their swing to try and “get ahead” of the pitches, but to no avail. Ashley had her way, and runs were scarce today for Nazarene.

The final score was 8-3 in favor of Gwen Liz girls over Nazarene girls; winning pitcher – Ashley Lucas, and the loser – Elma Wade.

Tomorrow in the finals for the Central Zone championship, big sister Amber Wade (she is smaller in body than Elma) will be on the mound for Ladyville Technical, trying to avenge her sister’s loss today, as they take on the intimidating Ashley Lucas on the mound for Gwen Liz High. Tyra Moreira strained her leg sliding into third base today. If it bothers her tomorrow, Ashley might have problems on the mound, and she will need to be at her best against Amber Wade and the Ladyville Technical girls.

Torrential rains came down about a quarter after six this evening, so the male game was rained out. Sports Coordinator Barbara Cadle informed us that the boys game between SJC and Wesley will be played at 2:00 p.m. tomorrow if the field is playable. After that, it will be the two championship games, first the females, featuring Gwen Liz vs Ladyville Tech, and then the males, with Nazarene High taking on the winner between SJC and Wesley.