Ham and turkey scarce for Christmas? 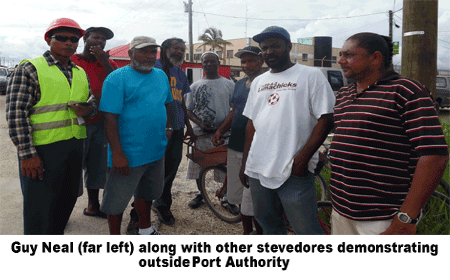 BELIZE CITY, Mon. Dec. 7, 2015–Stevedores were to report to work at 10:30 a.m. today to unload a ship that had docked at the Port of Belize Ltd., which contained Christmas goodies such as hams and turkeys, but instead of showing up to work this morning, the stevedores converged in front of the Port, where they held a demonstration.

Guy Neal, a foreman for the stevedores, who is on the negotiation team, told Amandala that their ire, which prompted the demonstration, arose from concerns over their retirement benefits.

Indeed, today’s industrial action by the stevedores was a part of their ongoing fight for fair benefits from their employer, they say. They took a stand and were not moved, even after learning that the ship was scheduled to return to Miami today, and it would depart even if it was not unloaded.

Our information is that the ship did depart at 6:00 p.m. today without being unloaded.

On Thursday, October 1, 2015, the stevedores of the Port of Belize Limited held a press briefing at the Christian Workers Union (CWU) Secretariat at 107B Cemetery Road; there, it was revealed that with the stevedores’ input, they have put together a Collective Bargaining Agreement (CBA). With the CBA in place, it seemed that progress would be made with the Port of Belize’s management.

Two months after that meeting, however, no progress has been made and it seems as if the Port of Belize is dragging its foot.

Neal said that the CBA has many points they would like to see addressed; for the moment, though, they are focusing on their retirement benefits, and that was why they were holding a demonstration today.

Neal said that the last time they took industrial action was on October 27, which was prompted by concerns over the same retirement benefits, and which resulted in a meeting with the Port of Belize.

Neal said that on December 3, Arturo Vasquez of the Port of Belize recanted his agreement, stating that he did not agree to the retroactive pension, but only for the pension plan to start from the present, moving forward.

Neal showed us a letter that was addressed to a stevedore from the Port of Belize, in which the Port clearly agreed to the retroactive payment.

“This letter serves to inform you that a decision has been made for your retirement effective November 21, 2014. Upon the date of retirement, you will be receiving retirement benefit of three percent per year on your basic, overtime and double time salaries from time of employment with the Port – December 8, 2004,” stated the letter.

Audrey Matura-Shepherd, the president of the Christian Workers Union, told Amandala that at 5:30 p.m. they held a meeting with the Port of Belize’s management to try to reach an agreement, but to no avail. Shepherd said that, as a consequence of this, the strike remains in place.

The stevedores believe that they play a very crucial role, since their work of unloading containers of goods makes it possible for the consumers’ needs to be met.

The consumer may indeed be affected by the standoff between the two entities: Another ship is due on Wednesday, but if the problem is not resolved, those expecting these Christmas goodies from abroad may not get them. Regarding ham and turkey products, it is not known if the local market can fill the gap.

The significance of the stevedores’ role may soon be realized by this industrial action, and just perhaps, the Port of Belize’s management will finally address their concerns fully.