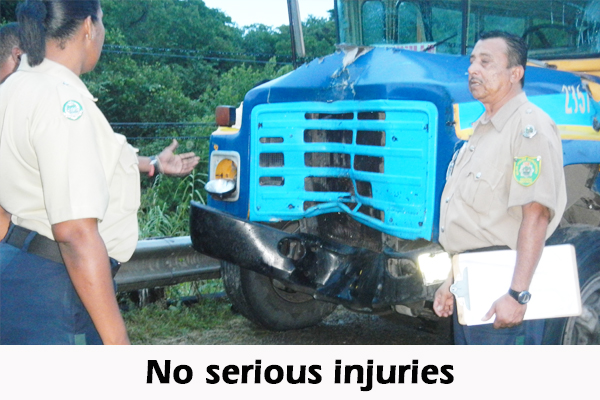 At 4:30 this evening, passengers onboard a Haylock Ladyville bus got more than they bargained for when a truck belonging to Belize Waste Control collided head-on with the bus.

The truck driver’s name was not released, but witnesses say the truck ran into the bus just as it crossed over the Haulover Bridge. The front of the bus was damaged, as well as the door.

The driver of the bus, Linsbergh Lewis, suffered an injury to his left leg, while as many as 15 passengers who were on the bus suffered minor injuries and were taken to the Karl Heusner Memorial Hospital for treatment.

The truck driver was alone in the truck and he left the scene uninjured; it is reported that he will be served with a notice of intent to prosecute.