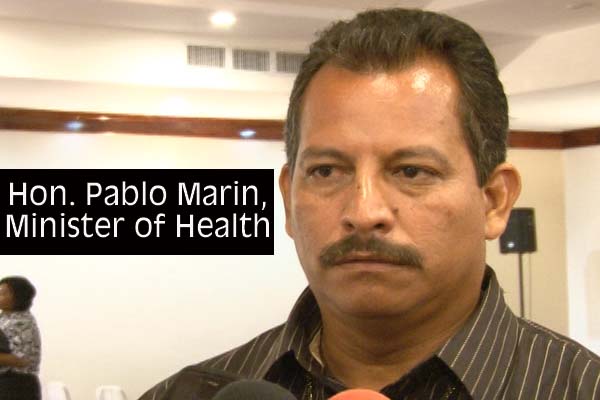 Ministry of Health officials, particularly Chief Executive Officer Dr. Peter Allen, have been under fire for the past few weeks from entities such as the Pharmacists Association of Belize (PAB), and although the Ministry called a press conference last Friday, May 9, to address serious allegations being made against him (Allen), not much progress was made and today, at another event being hosted by the Ministry, the media cornered Minister of Health, Hon. Pablo Marin, who responded to some of the accusations and maintained that, despite the unpleasant scrutiny, he still has the utmost confidence in CEO Allen.

The Minister first replied to e-mails provided to the media which indicated that sometime last June, whilst in a board meeting with the Ministry’s top brass, he (Marin) reportedly informed the board members that he would no longer continue to hold the requisite exams which pharmacists would regularly sit in order to get licensed and registered.

After first acknowledging Nurses’ Week and thanking all nurses for their hard work, he said, “It is not that we want to stop the exam, from day one I’ve been asking the entire Board – and it is on the record – that only about 50% of them [the pharmacists] pass the exams. What I did ask them [the board] is to please revise the curriculum and make it better because if you have 50% of them failing, someone needs to check on that. And 3 years after, they didn’t do anything about it so I decided to find out what is happening. They did the exam again, and up to now, they haven’t revised the curriculum and the amount of people failing the exam is on record.” The Minister went on to assert that the 50% rate of failure clearly indicates that the curriculum at UB must be looked at, and stated, “I am asking them [the pharmacists] to bring to me the changes to be done on the pharmacy level and they haven’t done that yet, and now, when we decide to put down our foot, people like the Pharmacists Association get mad at us.”

In any event, it is widely known that there are currently a myriad of issues within the Ministry of Health such as allegations of gross misappropriation of funds in the Central and Southern Regions, two Public Service Commission hearings involving Ministry of Health employees accused of wrongdoing coming up, recent audits from the Office of the Auditor General which point to administrative neglect, allegations of nepotism from the PAB, and multiple complaints of victimization and micromanagement against Dr. Allen himself, but when we asked Marin about his level of confidence in CEO Dr. Allen, he stated that he is standing by his CEO and even downplayed the predicament, describing them as “little troubles.”

“I have the full confidence in Dr. Allen. We have seen from day one that the Ministry [of Health] has improved tremendously in areas such as pharmaceuticals and the amount of doctors which show that our Ministry is doing good. We have even won international awards”, the Minister said. He then went on to attribute the “little troubles” to “people in the Ministry that are not working with us.”

“Whenever we try to do something, they shout at us that we are micromanagers – just like what happened in the south, there are managers and accountants there and look at what has happened. What can we do? Go around to all the hospitals and look at them? It would be micromanaging then. In the case of the pharmacists, we have been asking them for 6 years to look at what is entering the country and nothing has been done. Now that we are trying to implement a way to look at the system, then they start talking,” the Minister said.

Reporters also enquired whether Allen has issues with anyone else in the Ministry apart from the Chief Pharmacist and the PAB since the embattled CEO has been under unpleasant scrutiny from various quarters lately, and especially because we were told that there was a case between Allen and a nurse in the recent past whereby he (Allen) had called police to get her out of his office because of a personal issue he had with her.

Marin however, told us that he cannot comment on the matter because he doesn’t know about it.

While Marin told us that the Ministry did not want to be accused of micromanagement in the Southern region, hence the lack of oversight, an audit which was leaked to the media recently suggested that there was no control over a public account that was allegedly being exploited for personal use by Nasley Sommerville, an administrator at the Southern Health Region – an allegation which he claims that the Ministry is presently dealing with.

Marin stated, “Everything that happens in the Ministry will buck at the CEO or myself. Now that we are implementing these kinds of regulations, you will see the changes. We are working on it; sure I am concerned when you look at $300,000 missing in our Ministry when we need ambulance, medication, we need to hire more doctors – definitely it is a concern so we have to look at it but when it is the public system, it’s hard for us to deal with it, so just give us some time.”

Last month, Melinda Guerra, the manager of the Central Health Region, was accused of misappropriating funds at Central Region and is now awaiting a Public Service Commission Hearing to determine how she will be reprimanded if found guilty.

Even though an audit of her performance reportedly came upon irregularities, credible sources told us that she is now in line to take over as manager of the Western Regional Hospital in the near future.

When presented with the opportunity to provide an explanation, Marin did not say much, and simply answered, “Well we just have to wait until the hearing is finished. That is the way it works and when everything is finished then you will see.”

While Marin maintains that the issue with pharmaceuticals is concentrated in the private sector, and told the media, “our contracts have a safeguard for the medication [we import] and the situation that we have right now is medication coming in through the private sector and that’s what we have to deal with”, Procurement Manager at Central Medical Stores, Arik Lima, had indicated that pharmaceuticals like Amoxicillin – a core drug which should always be available – was actually unavailable for one month, and that Central Medical stores consistently did not have requisite medical supplies to provide to clinics and public hospitals for extended periods of time – particularly in last December. However, the Minister simply brushed it off, saying that is a different issue.

“That is a different issue. I’m saying that if there is a medication that is not working properly, then our doctors and pharmacists will advise us and we check the medication and if it is not good then we remove it from the shelves. If there is someone not supplying us in a timely manner then we have all rights to get the medication from another person. I don’t know about that one but I will look into it and then I can tell you”, Marin responded.

Although Dr. Allen was along with Marin at the event, he declined to speak with the media, insisting that he is not in a position to answer the same questions he did last Friday.