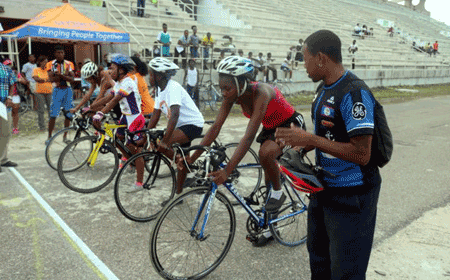 These races came about in an effort to encourage higher female participation in the sport of cycling. Currently, the female field is very small and, hopefully, by introducing cycling as a high school sport, the numbers will grow, and the field will eventually become significantly bigger.

The C-Ray Cycling Club provides road bikes for all participants who do not have one to race on, as well as helmets.

Considering that these are track races, student athletes are divided into groups of six in their respective categories, where they race in a preliminary round. The top two from each heat then advance to the semi-final round, and are again placed in groups of six. The top two again advance to the final round, where the top five winners are awarded with medals. All student athletes who complete their races are awarded with points: 1st place through 6th place are awarded from 6 points to 1 point, respectively. At the end of the series, the points will be added up, and this will determine the overall winners in each category.

The first week of racing saw Wesley College’s female team dominate. They won five of six preliminary heats, three 2nd places and one 3rd, which qualified all 9 females on their team to advance to the semi-final round. Sadie Vernon was the next best with 4 team members qualifying to the next round; while for Excelsior, 3 team members qualified.

In the Male Category “B,” Wesley College also had the most student athletes qualifying to the semi-final round with 4 team members, followed closely by Edward P. Yorke, Excelsior and Maud Williams, who all had 3 team members qualifying.

There are only 10 student athletes in the Male Category “A,” eight from SJC, and one each from Wesley College, Gwen Lizarraga and ACC; so there is no doubt that the finals will be filled with SJC guys. SJC showed their dominance by winning both preliminary round heats and advancing four of their team members to the finals.

The results are as follows:

Male Category “B” – Preliminary Round

Male Category “A” – Preliminary Round

The winners of the preliminary round have advanced to the semi-final and final rounds, which will take place this Thursday, April 28, inside the Marion Jones Sports Complex at 4:00 p.m.

Next week Thursday, May 5, we commence with Week 3, and all our student athletes will be divided into different groups of six, where they will be given another chance to qualify and gain more points.