Home Features “History of judge, jury & executioner by the police & their enabling...
Features

“History of judge, jury & executioner by the police & their enabling politicians” 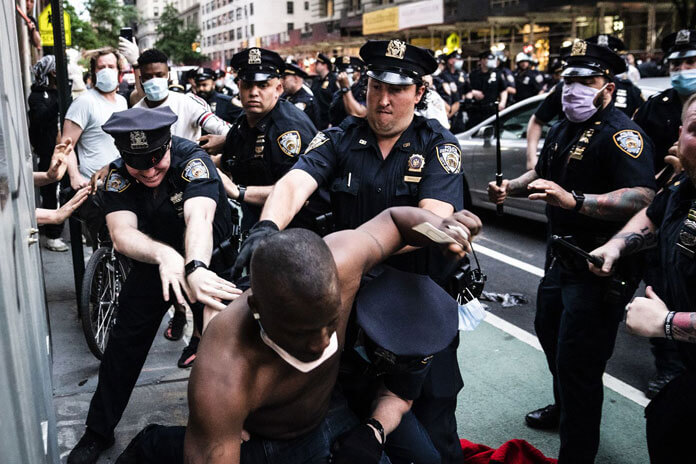 In the summer of 1986, a white California Highway Patrol officer in a routine traffic stop in south-central Los Angeles executed an African-American man by shooting him 3 times in his back. Yusef Bilal was 38, unarmed, a California State University graduate, a senior transit operator for the city, and a father of three. At the time of Bilal’s execution, his wife was pregnant with their 4th child. The police investigation ruled the execution was justified.

I knew Yusef Bilal from his friendly demeanor and courteous manner as a public transit operator. When it was announced that the police found no wrongdoing in the murder of this unarmed black father, the community organized a protest march and demonstration in front of the CHP regional headquarters in north Hollywood. While not on the scale of today’s demonstrations, the local protest went on for several months in a call for justice for the Bilal family.

The history of law enforcement executing black people (and particularly black males by white officers) is a long, cruel, and bloody journey in America. Six years later, Los Angeles would explode into violent insurrection after the savage police beating of another black man named Rodney King and the acquittal by a court of all the police officers involved. For several weeks the city was paralyzed and brought to its knees. The Department of Justice launched a federal investigation and the Christopher commission was created to make recommendations for policy reforms in the LAPD. Among the findings of the commission was that the LAPD had a recruiting practice that led to a police force that was decidedly white and unrepresentative of the multicultural makeup of Los Angeles. It was revealed that many of the white recruits came from out of States like Idaho, Arizona, and Arkansas. Some had ties to white supremacist groups and never lived in the community they were supposed to serve and protect.

Symbolic and cosmetic changes were made by the appointment of several “black” police commissioners of the second largest police department in the United States. But the executions continued unabated over the intervening years. While this did not get national attention, just a few days ago another young black male was executed by being shot several times in his back while running away from the Pasadena police. Pasadena has a history of the shooting deaths of black males by police, but there has never been a conviction of a single officer.

In understanding the politics between police departments and politicians, one has to examine the relationship of powerful police unions and electoral politics. Each would-be candidate for the office of mayor, DA, or attorney general must win the endorsement of the local police unions. Winning this endorsement requires a certain pledge to not rein in an unbridled police force. It’s the single impediment in the justice system that explains why politicians come and go but the systemic abuse, brutality, and zero accountability remain in the police departments across the nation.

Tragically, some of the politicians who enable this scourge to flourish while nibbling around the edge of the problem and pretending to fix the abuse are the same ones posturing for police reform today. None of it will bring back Yusef Bilal, George Floyd, Breonna Taylor, and the black man and woman who will be shot and killed tomorrow.