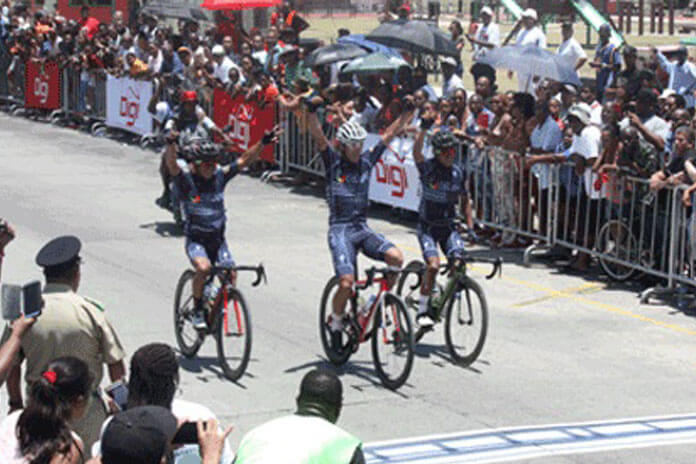 BELIZE CITY, Mon. Apr. 6, 2020– Easter weekend is near, but like in 1932 when the September 1931 hurricane caused a cancellation of the subsequent Holy Saturday Cross Country Classic, once again a generation of Belizeans is about to experience a Holy Saturday without Cross Country, thanks to the untimely intervention of the dreaded Covid-19 coronavirus, which claimed its first victim inside the Jewel yesterday. (Our sincere condolences to the family of brother Hubert Pipersburgh.)

In dealing with adversity, an old Kriol saying says: “Every disappointment da fi di betta.” It sounds kind of self-defeating, but on this occasion, where in all likelihood we could have experienced another Guatemalan sweep, maybe it is for the better that Cross Country is postponed till next year.

Around September or October of last year, former cycling association president, Stansmore Bowman, himself a former top cyclist, expressed his desire to contribute towards the preparation of our best Belizean cyclists for this year’s Cross Country, so as to avoid a repeat of last year‘s debacle. His offer was ignored by the local association, and so it was business as usual on the local cycling scene. And the likelihood of a repeat of last year seemed ever more real.

Now, the race is off, and maybe it is a good thing. Of course, despite the possibility of more pain and disappointment from another Guatemalan sweep, Belizean fans and the cyclists themselves would still choose the race, if it could somehow avert, rather than increase the chances for loss of lives from this dreaded Covid-19 pandemic.

Yesterday was Easter Sunday, and the stay-at-home rule will remain in effect for the coming weekend, when our religious community will share messages from the various clergy by radio, television and live-streaming. As in years past, Good Friday this year will be quiet, calm and melancholy, especially for the religious, pondering the suffering and crucifixion of the Messiah; but, unlike the tradition of previous years, we will not wake up on Holy Saturday morning to the thrill of early reports on the start of the Cross Country Classic.

Maybe it is better this way. We will be forced to reflect and reminisce on the glorious history of our Cross Country, and recall the heroics of great champions of the past. And we may also have time to consider if we are presently on the right path. Where do we want to go with our Cross Country? And if we insist it will remain international, where did we make mistakes, and how can we prepare better, to increase our chances of keeping the garland at home?

As part of our reflection, below is our report on last year’s Cross Country.

Saturday, April 27th, 2019
BELIZE CITY, Thurs. Apr. 25, 2019
In Belize, Cross Country is not just a sport; it is culture, history and sports all rolled up into one; and Belizeans are still recovering from the shock of an unprecedented sweep of all top 3 prizes by Guatemalan cyclists representing the Guatemalan National Team.

There has been some controversy, and it is indeed a time for reflection and analysis of how we came to this, and the role of our Belizean-Americans in all facets of the growth and development of our nation.

We have to try and “pick sense from nonsense.” And then decide what we really want to do with our Holy Saturday Cross Country, the historic 144-mile journey to San Ignacio and back to Belize City.

For now, let’s review the groundwork of our Holy Saturday tragedy.

From the Linkup Cycling team, strangely, 3 were registered as Belizeans and 2 as “USA”.  Those 2, incidentally, were defending champion, Justin Williams and younger brother, Corey.  Add the 3 Belizeans just mentioned and the total registered as “Belizean” cyclists comes to 89.

Because of our “amateur” situation in sports in Belize, the pundits pay close attention to the quality of foreign participation, which could potentially over-power the local field of few top-quality riders. So, what was the quality of foreigners “invited” by the CFB to take part in our most historic cultural/sporting event?

2 of the unattached cyclists were also registered as “USA.” They included 58-year-old Anthony Taylor and 49-year-old Bill Elliston, a former Cross Country champion; but both were not considered much of a threat at their present age.

Now for the foreign teams. Team Classic was 4 “USA,” including past back-to-back champion Chris Harkey; but they were 4 veterans with an average age of 45 years. Dedicated cyclists, they could be competitive, but not beyond the reach of our best young cyclists.

Team Quintana Roo was 2 young “MEX”, Jonathan Coache-Reyes, 24 yrs, and Salvador Jimenez-Martinez, 31 yrs. They are worth watching, but the farther up north toward Mexico City, the tougher the competition. Belizeans wouldn’t be too worried.

Team Cozumel, with 3 fairly familiar “MEX” faces would give good competition, but our boys wouldn’t be intimidated by the trio of Luis Avila-Balam, 34 yrs, Darwin Torres, 44 yrs, and Jorje Alberto Bustillos, 29 yrs.

At its highest level, cycling is nowadays very much a team sport, and team strength, as expected, is limited by the weakest link.

Before we look at the Guatemalan team, we take a look back at the 2 “USA” cyclists on the Linkup team – Justin and Corey Williams, who, according to CFB officials, chose to maintain their USA status because of something to do with upcoming events in the US. No problem. They are still “our boys;” and whatever it takes, Belizean fans want a Belizean to win “the Country.” And nobody can tell us that Calman’s sons are not Belizeans. But something strange happened, according to what we have gleaned from post-race interviews and Facebook posts.  The Linkup team was not allowed to register another “USA” cyclist of a high caliber, which would have made them 3-strong in top quality riders. Why?

Now, the other foreign team in this year’s Cross Country was the 3-man “Guatemalan National Team,” fresh off their recent National Championships in Guatemala. And their ages? Alex Rony Julajuj, 21 yrs, Julio Padilla Miranda, 26 yrs, and Jose Canastuj, 22 yrs. Anyone who looked at these numbers would sense trouble. And trouble is what transpired for Belizeans on Holy Saturday.

Rules are rules; but, from the looks of things, the Cycling Federation may have dealt unnecessarily harshly with our Belizean-American brothers, two of our best hopes for a Cross Country championship. Would it have been unfair to anyone, and to whom, for the CFB to have allowed Justin and Corey’s request to bring along another USA cyclist, so that they would have a strong 3-man top quality team to compete against the Guats?

“We come to Belize every year to represent our family and friends. This event has been in our hearts since we were kids and we try to make everyone proud every year. We understand you can’t win them all but can’t help but feel slighted by the Cycling Federation of Belize. So, we will not be returning to the Cross Country Classic in 2020 if the Cycling Federation of Belize doesn’t allow us to bring a team to help us fight for the Garland. We will no longer take on the burden of trying to win with unfair odds.

“Every year it’s something else. Now Cory & I don’t qualify for Belizean prizes because our license doesn’t say BIZ, but we are still held by the standard that Belizean teams are. (Cory and I) cannot have foreign riders on their team.”

From the above, it appears that the CFB applied its rules to Justin/Corey where they were registered as “USA” licenced cyclists; but at the same time they were restricted, like other Belizean teams, from “strengthening” their team with foreign riders. Sounds contradictory. So, Team Classic could have 4 “USA;” Team Cozumel could have 3 “MEX;” and the Guatemalan National Team had 3 “GUA;” but Justin and Corey couldn’t have 1 more “USA” to make it 3 “USA” on their team.

And respect to our 2018 champion, Justin Williams, our last Belizean champion. You gave your all, like Corey, and Giovanni and our other Belizean cyclists. Hold your heads high, guys; you didn’t let us down. The “system” did; and we surely need to fix it before next year.

45 cyclists completed this year’s Cross Country, 36 of them within the 45-minute limit after the winner: