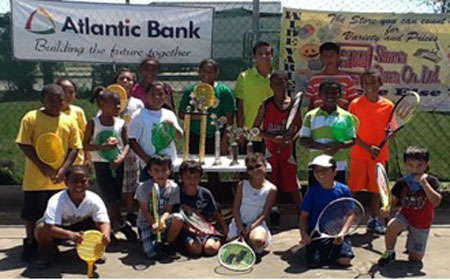 BELIZE CITY, Mon. Mar. 16, 2015–Junior tennis players, hailing from St. Mary’s Primary School, Horizon Academy, Belize Elementary School and Hummingbird Elementary School gathered at the Pickwick Club Tennis Courts on Saturday, March 14, in the first ever Primary School Tennis Competition, hosted by the Belize Tennis Association and sponsored by Atlantic Bank Limited, Simon Quan & Co. Ltd. and Brodies. The tournament was a Red Stage One, geared toward beginner level with smaller tennis courts, bigger and less bouncy balls, and smaller racquets; and it will be held bi-annually. All the children showed awesome potential, and some of the rallies were very long, which shows how greatly they are improving!

After about 4 hours of playing round-robin style, Horizon Academy garnered the most wins and took the 1st place trophy, with Hummingbird Elementary School taking the 2nd place trophy. Belize Elementary School and St. Mary’s Primary School took 3rd and 4th place trophies, respectively. For the individual category, Daniel Musa from Hummingbird took the gold medal, whilst James Courtenay from BES took silver, and Anthony Rudon from Horizon Academy took the bronze. Errol Ferguson from St. Mary’s Primary School must be recognized for being the most improved player, and a player who shows a genuine love and natural talent for the sport.

Thanks to the primary schools, the coaches and parents for their support; and special Thank You to Atlantic Bank Limited, Simon Quan & Co. Limited, and Brodies for sponsoring the first of its kind competition.

The next Primary School Tennis Competition is set for May 16, so all junior players are encouraged to keep on practicing!