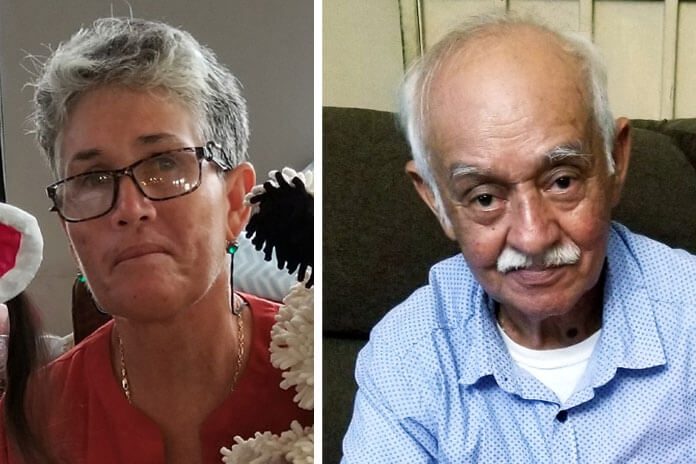 ORANGE WALK TOWN, Mon. Dec. 16, 2019– The Huezo family of Stadium Street in Orange Walk Town is reeling, trying to face the unbelievable reality, that their elderly, law-abiding parents, who were just trying to live their lives in tranquility with their family, have been brutally and senselessly murdered.

The body of Rafael “Don Lito” Huezo, 80, a veteran watch repairer, was found lying in the hall of his house with multiple stab wounds in pools of his blood in a state of decomposition, while his wife, Nancy Huezo, 75, who owned a little shop in the family yard, was found lying lifelessly in pools of her blood on her bed, with multiple stab wounds in her body. She was also in a state of decomposition.

The horrendous discovery was made at about 9:30 this morning by one of the couple’s sons, who came to check on them after not hearing from them since Saturday.

After the scene was processed, the bodies were taken away to undergo an autopsy to certify the cause of the couple’s death.

On our arrival at the family’s house this afternoon, family members were present and were consoling each other. The atmosphere was somber.

Rafael and Nancy had three sons and a daughter. Through sobs, the daughter told us that all of them were at home with their parents on Friday, and all was well.

On Saturday, she wanted to tell her mother something and began to call her phone, but got no response. She thought that they may have gone to Chetumal, Mexico, and was not alarmed.

She later called again, when she believed that they should have returned, but still, the parents did not answer the phone.

On Sunday, she again tried to contact her mother, but the effort was in vain. She then called her brother and asked him to check on their parents, because she had been trying to contact them, to no avail.

Her brother said that he was going to check, but did not do so until this morning, Monday, when the horrible discovery was made.

Police are looking for one of Rafael and Nancy’s close relatives, who they believe can help the investigation. They are also looking for the couple’s SUV, believed to be stolen. It is not yet known if anything is missing from the house as it was not checked because of the stench of the decomposing bodies.

ACP Joseph Myvett of the Police Department said that the motive for the murder of the elderly couple is not known.

By all accounts told to us, the elderly couple was well-loved. Rafael Huezo, affectionately called Don Lito, had been a watch and clock repairer all his life, and he was still working at the time of his death. He was well-known and respected in the community.

His daughter told us that her mother operated her little store and she was also still working up to the time of the senseless murder.

Everyone is at a loss as to the reason for the murders.