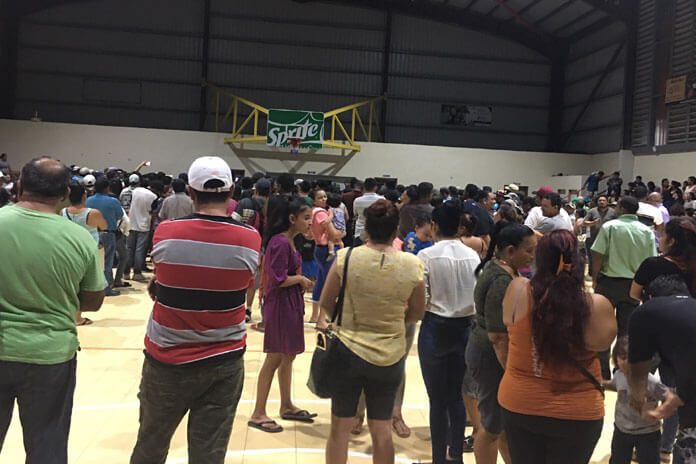 BELIZE CITY, Tues. Jan. 14, 2020– Hundreds of Central American immigrants who have been living in Belize, but have not yet obtained their residency or citizenship documents, descended on Swift Hall, on the St. Martin De Porres compound on Tuesday evening in search of answers from Immigration Department officials about their status in Belize.

Minister of State with responsibility for immigration, Hon. Beverly Williams, who was expected to be at this evening’s event, did not attend. Instead, the Chief Executive Officer for the Ministry of Immigration, Harold Zuniga, and the Immigration Director, Debra Baptist Estrada, were on hand to answer immigrants’ questions.

Last Thursday, a large crowd of immigrants descended on the office of the UDP Lake Independence standard bearer, Dianne Finnegan who threw jabs at the Immigration Department for not doing their work and ignoring the human needs of the immigrant population in the country.

Following the meeting, CEO Zuniga told KREM News, “We came to talk to them and hear what their immigration issues are, and to share with them some of the regulations and what the requirements are in order to be able to fulfill the requirements for whatever it is that they need. Many of the people spoke about having lodged applications and they haven’t had feedback, and so what we have done is to encourage them to visit us again in Belmopan.

“Over the last few years, we’ve kinda changed our processes, and so we would want to see them again, be able to pull out their files and see what it was that stopped their process from going through.”

“Mr. Zuniga indicated that there is no longer a backlog as it relates to nationalities. He is saying that since 2014, going back to that time, there was a backlog. Now, it’s current, so why is it that we’ve seen this large amount of people here, a lot of them indicating that they are not getting any feedback? What could have gone wrong there?” Zuniga was asked.

“There are a couple things — I think that some point in the past, whenever our offices couldn’t get in touch with individuals, they would close their files and put them away, and forget about those files. We’ve also gone through now an exercise where we’ve converted files for nationality, in particular for persons who applied for citizenship from Guatemala, and you know we no longer issue citizenship to Guatemalans, and so we’ve converted their files to permanent residence applications, so we need those people to come in so we can update the new file for permanent residence and be able to issue them,” CEO Zuniga said.

KREM News asked Zuniga, “Now, it is an election year, and when this last happened in 2012, immigration and nationality officials admitted that in the Senate inquiry, steps were missed. What guarantees are there to the Belizean public that this will not happen again?”

“Oh no, things have changed considerably since that time, “ CEO Zuniga responded, “The law was amended and there is now a nationality scrutinizing committee, and that committee is a mixed committee of public/private sector people. The private sector people’s job is to see that we do what we are supposed to do.

Zuniga was asked how long the process should reasonably take, if someone has all of their documents together.

“Well, we are getting better; actually, the last time the Nationality Scrutinizing Committee met, we were looking at applications for 2018. There may have been 1-2 for 2019, so the timeline is now I would say 8 months to a year, and the person should be able to get some results.”

“Now, you have accommodated the (UDP) standard bearer for Lake I, and this is something that’s been greatly criticized by a large number of the Belizean population, and even the minister herself seems to have had a double view, and probably she took back what she has initially stated to Channel 5 and then what she told Channel 7; it was in a sense criticizing what Mrs. (Dianne) Finnegan has done. What do you say to the Belizean people about what has happened here and the Immigration Department, the ministry accommodating Mrs. Finnegan now?” Zuniga was asked.

Zuniga replied, “I don’t see it as accommodating Mrs. Finnegan [wife of Minister Michael Finnegan]; we are public officers, and the people who are here tonight are members of the public who have a concern with immigration.”

Feature photo: Crowd at the Swift Hall on Monday night

A Motion for Good Governance

Who will run in Corozal Bay by-election?