Home Features Inflation 1.7% and exports down 22% for first quarter
Features

Inflation 1.7% and exports down 22% for first quarter 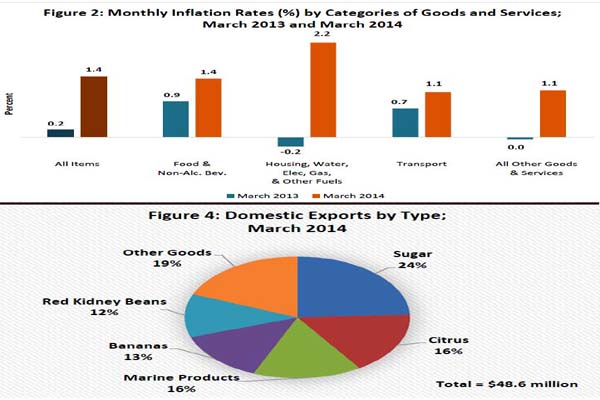 Belize is reporting an inflation rate of 1.7% for the first quarter of 2014, according to information released today by the Statistical Institute of Belize (SIB). Although the inflation rate is marginal, consumers were faced with substantial price spikes for red kidney beans – a staple commodity of the national dish.

While the bad news for consumers on the local market was an increase of 24.4% in the price of red kidney beans, from $1.99 a pound to $2.48 a pound in the month of March, the good news for the productive sector is that export earnings from the sale of red kidney beans to Jamaica was up by $3 million due to higher demand from the sister Caribbean nation.

The overall inflation rate for March 2014 was 1.4% higher than March 2013, and the most significant price increases were recorded for beef, pork, black beans, red kidney beans, cabbages, carrots, onions and limes.

Cooking costs are also higher, due to a rise in butane prices.

The SIB noted, though, that sweet pepper and tomato prices fell considerably due to substantial increases in the supply of both products.

Real estate rental prices for March were also higher in some municipalities, with home rentals in March, especially in Dangriga, San Ignacio and Belize City, reported at almost 2 percent higher than in the same month last year.

Meanwhile, leading productive sectors were reporting declines in exports even as the import bill continues to expand.

“Imports for the first three months of 2014 totaled $442.2 million, up $24 million or 6 percent from the same period in 2013. Consumer goods were the largest contributors to this increase, rising by as much as $21 million due to increased purchases of vitamins, seeds and wines,” the SIB reported.

“This fall was entirely the result of no sales of crude petroleum and a decline in sugar and orange concentrate exports of $7 million and $4 million, respectively,” the SIB said.

Although Belize exported over $139 million worth of goods in the first quarter, this was 22% less than what was exported for the same period last year, with a falloff in exports of crude petroleum, sugar and citrus concentrate, which meant $40 million less in export earnings. However, a notable increase in exports was recorded for marine products.