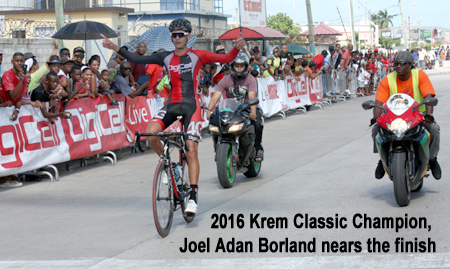 BELIZE CITY, Thurs. Dec. 29, 2016–It will be a sporting weekend extravaganza, as the old year ends on Saturday night, New Year’s Eve, with the Premier League of Belize (PLB) 2016-2017 Opening Season championship finals in Belmopan – Bandits vs BDF; and then on Sunday morning, New Year’s Day, the spotlight moves from football to cycling, as the Cycling Federation of Belize in collaboration with KREM Radio presents the 27th Annual KREM New Year’s Day Cycling Classic.

The Elite/Masters race takes off from the border in Corozal, while the Female and Junior races begin in Orange Walk Town. Start time is 9:00 a.m., and they all end on Central American Boulevard before its junction with Mahogany Street.

Please drive safely; and a Happy New Year to all!