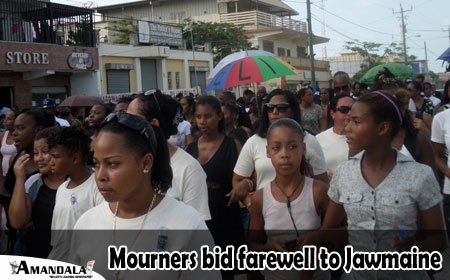 BELIZE CITY—Hundreds of mourners, friends, sympathizers, well-wishers, and family members of legendary cyclist Ernest “Jawmaine” Meighan proceeded along the Central American Boulevard, after having left the Central Assembly of God Church at the St. Thomas Street roundabout in Freetown to honor Meighan after his funeral services were conducted.

His casket was transported in a horse-drawn carriage, with trumpets blaring in the funeral procession, acknowledging the presence of the champion, to be buried at the Lord Ridge Cemetery.

Before being buried at about 4:30 Friday afternoon, Jawmaine’s body lay in state in the church from 12:00 midday, and the funeral service started at about 1:30. At the service, he was remembered by many speakers who addressed the packed church to share their memories of him.

Among those who remembered Meighan were Minister of State in the Ministry of Finance and Economic Development, Hon. Santino Castillo, noted cyclist Fitzgerald “Palas” Joseph, Hon. Patrick Faber, Councilor Dion Leslie, and Andrew Ordonez, among others.

In his remembrance, Joseph noted that Jawmaine had represented Belize in all the international races, including the Commonwealth games, Pan American games, the Central American and the Caribbean games, and he made the Jewel proud wherever he went.

About 100 cyclists from different cycle teams, along with many of Meighan’s friends and a crowd of other mourners formed the procession, which moved from the Central Assembly of God church onto St. Thomas Street, left onto Freetown Road, and around the roundabout at Belcan Bridge, then onto Central American Boulevard, over BelCan Bridge, with crowds lining the street to pay their last respects to the champion.

Jawmaine’s sister-in-law, Shelly Meighan, sat on the front seat of the carriage beside the driver, holding up a photograph of Meighan when he won the 2001 Cross Country Cycling Classic, and walking behind was a family member carrying his Cross Country trophies.

Emotions were high and there was a certain degree of anger on the part of mourners, as the legend was being escorted to the cemetery.

Jawmaine is survived by seven children, his common-law-wife Marinette Flowers, his sister, Paulette, and a host of relatives. He is also survived by his extended family of the cycling world and the nation of Belize.

A legend has been put to rest. Amandala offers sincere condolences to his family.