John Briceño sworn in as Leader of the Opposition 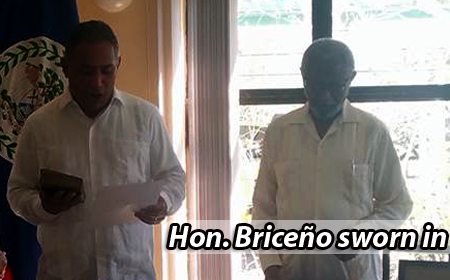 BELIZE CITY, Mon. Feb. 8, 2016–The newly elected leader of the Opposition People’s United Party (PUP), Hon. John Briceño, was sworn in this morning at a ceremony at Belize House by His Excellency Sir Colville Young, Governor General of Belize.

The PUP elected its new leader at a special National Convention on Sunday, January 31, and Hon. John Briceño, the Orange Walk Central area representative, emerged victorious out of the three-man race to lead the PUP, after its former leader, Hon. Francis Fonseca, resigned in the wake of the party’s defeat at the polls in the November 4, 2015 general elections.

Briceño campaigned for leadership on the slogan “Ready to Lead; Ready to Win.” He had resigned his leadership position in October 2011, just months before the March 2012 general elections.

Briceño has pledged to unite the PUP and make it viable for winning elections, something that has apparently been a challenge for the Opposition, which continued on a losing streak since it lost to the Hon. Dean Barrow-led United Democratic Party (UDP) in 2008, after serving an unprecedented two terms from 1998 to 2008.