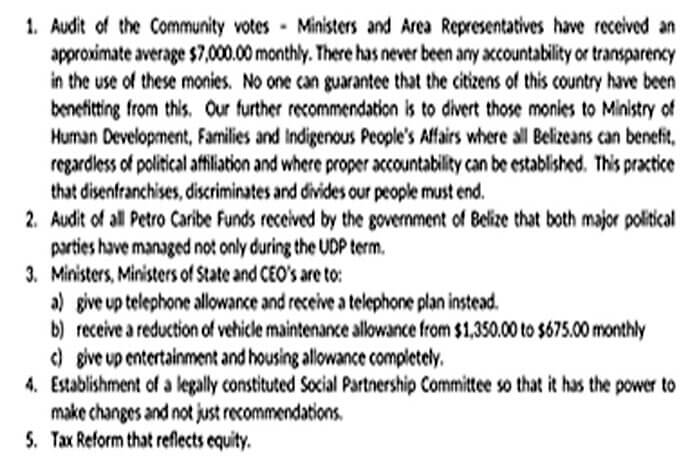 BELIZE CITY, Tues. May 25, 2021– It has been about two weeks since GOB issued a letter of the Government’s Undertakings to the Joint Unions in which it presented its most recent offer to public workers in a bid to reach an agreement regarding the recently passed salary cuts. As stated by Prime Minister John Briceño in a public statement, the letter was the Government’s final attempt at proposing concessionary measures in a bid to obtain the union’s buy-in. The document outlined a number of compensatory incentives, including reduced working hours, leniency for mortgage-holders, and an annual performance bonus that would hinge on whether GOB reached its projected targets. It also included proposed good governance laws that the government pledged to enact.

Last week, the Joint Unions finally responded with a letter of their own dated May 25, 2021. The Public Service Union of Belize (PSU), the Belize National Teachers Union (BNTU), the National Trade Union Congress of Belize (NTUCB) and the Association of Public Service Senior Managers (APSSM), collectively known as the Joint Union Team (JUT), acknowledged receipt of the PM’s letter, which they believe was disseminated in a way that was “not only disrespectful to the workers of this nation, but also a threat to our democracy and an insult to our heroes who have genuinely fought for our country.”

The letter from the Joint Unions goes on to refer to the “corrupted modus operandi of placing the interest of the political party first and not that of the country.” The JUT expressed the view that the PM’s decision to conclude consultations without addressing their previously presented 11-point recommendation for good governance was a strategic way to avoid causing any inconvenience to prominent members of the People’s United Party.

The initiatives they had recommended including auditing community votes, auditing all Petro Caribe funds, a discontinuation of telephone allowances and entertainment allowances as well as a reduction of vehicle maintenance allowances for all Ministers, Ministers of States and Ministry CEOs, establishing a legally constituted “Social Partnership Committee” and undergoing tax reform that reflects equity.

Despite the unions’ objections, however, the Ministry of Education has proceeded to circulate an internal memo reminding primary, secondary and tertiary school staff that the 10% salary cuts will come into effect on June 1, 2021. Additionally, teachers who have been striking beyond May 17, 2021 will have those days’ wages deducted from their end-of-month salaries. These cuts were passed into law at a meeting of the House of Representatives held last Friday and goes to the Senate on June 4.

Belize City, Wed. Nov. 24, 2021-- In the past months, Belizean consumers have been seeing the price of goods rise continuously. Back in September,...
Read more
Politics