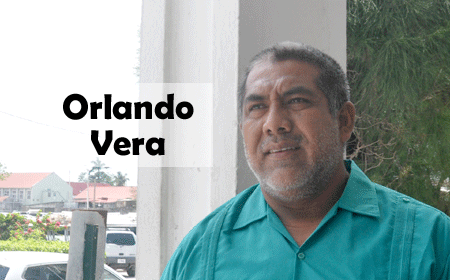 BELIZE CITY, Fri. June 9, 2017–Less than 24 hours after Orlando Vera, the convicted Deputy Director of the National Forensic Science Services in the Ministry of Home Affairs, was sentenced to two years in prison, he was back in court.

Today, Vera and his attorney, Anthony Sylvestre, who had filed appeal paperwork when Vera was first convicted on the charge of “abetment to pervert the course of justice” last week, appeared in the Supreme Court before Justice Herbert Lord for a bail application hearing.

On Thursday, June 1, Chief Magistrate Ann Marie Smith found Vera guilty of perverting the course of justice. The charge against Vera stems from an incident that occurred between June and July 2015, when he offered to tamper with evidence for firearm offences the Iranian-American businessman Michael Modiri was facing. Modiri, who was the Crown’s main witness at the trial, recorded Vera making the offer and handed it to authorities.

Before the robust legal fireworks between Sylvestre and the Director of Public Prosecution, Cheryl-Lynn Vidal, who had successfully prosecuted Vera in the lower court, were made, Justice Lord informed the parties that he would not issue his ruling on the bail application today.

After listening to the more than one-hour long submissions, Justice Lord told the parties that he will issue his ruling on Tuesday, June 13, at 2:00 p.m.

In his opening remarks, Sylvestre told the court that Vera’s conviction is the first time someone has been convicted under that particular section of the law.

Sylvestre read a section from the Chief Magistrate’s judgment before asserting, “The Crown was not able to prove that the course of justice was perverted, and that Vera caused the crime to pervert the course of justice. Certain things were said by Vera, but the elements of the offense were not proved by the Crown at the trial in the court below.” 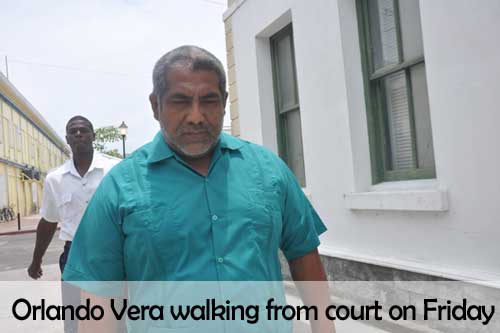 Sylvestre cited the case of Danisha Chaves, a local abetment case that was heard in the Supreme Court before Justice Herbert Lord.

“There is a clear judicial pronouncement of how abetment is committed. The principle is explained in the Danisha Chavez case,” Sylvestre submitted.

“The wrong principle of law was employed, and this led to the Chief Magistrate wrongfully convicting Vera,” Sylvestre submitted.

After methodically arguing the sections of the law he was relying on, Sylvestre turned his attention to the 2-year sentence Chief Magistrate Ann Marie Smith imposed on Vera.

“The crime was not committed, no harm was committed, and the maximum penalty for the offense is 5 years,” Sylvestre continued.

Justice Lord inquired from Sylvestre why he was arguing along those lines. Sylvestre replied that he wanted to show the court that his appeal has a reasonable prospect of succeeding.

“Under the Crime Control and Criminal Justice Act, this offense is not one of those offences in which the magistrates are prevented from granting bail,” Sylvestre told the court.

DPP Vidal, in opposing the bail application, told Justice Lord that, “at this stage, bail is at the discretion of the court.”

DPP Vidal suggested that the remaining paperwork for the appeal be filed within one week and that the appeal could be heard this month.

“My learned friend said that the learned Chief Magistrate made an error in law….the Chavez case said in order to be an abettor, the person charged must know that a crime is being committed or is about to be committed. These words were found in both the Chavez and the Gordon judgment [another Belize abetment case]; not because they are found in both, means that they apply to the case at hand,” DPP Vidal argued.

“Orlando Vera,” DPP Vidal submitted, “was the person who instigated the offence. He is charged with instigating, not committing. The Chavez case makes it clear that the offense is complete with the instigation. Gordon and Chavez must be confined to their facts. So, My Lord, it is our view that this does not provide a special and exceptional circumstance for this petitioner to be granted bail.”

DPP Vidal argued that the prison sentence of two years is an appropriate sentence because Vera offered to pervert the course of justice in a case where he was to be called as a witness. “We are of the view that the sentence is a just sentence,” she said.

DPP Vidal told the court that the matter (Vera’s appeal) can be heard in the month of June “and can be finally disposed of,” and that none of the reasons advanced by the petitioner amounts to special circumstances on the basis of which the court should grant bail.

In his rebuttal to DPP Vidal’s submissions, Sylvestre argued that Danisha Chavez was charged with abetment to dangerous harm, an offense which carries a maximum penalty of 20 years in prison, and she was fined instead of being sent to prison.

“This applicant is convicted of abetment, which carries the maximum penalty of 5 years and he was sentenced to 2 years. In the scale of the Chavez case, the sentence of Vera must be considered a harsh sentence.”

DPP Vidal had submitted that at the time of her sentencing, Chavez was in an extremely difficult pregnancy, but Vera cannot be said to be suffering from such a condition.

After the hearing, Sylvestre explained to 7News and Amandala, “One of our arguments is more of a legal, technical argument in relation to whether what is alleged to have been done was in fact actually a crime, and so that is one of the points which we will argue on appeal, but what we have sought to do is to have Mr. Vera be placed on bail pending the hearing of his appeal.”

7News’s Daniel Ortiz asked Sylvestre, “it seems a rather daunting challenge to try to side-step or overcome what is a recording of this offence as the prosecution claims it to be, and as put forward before a magistrate. It sounds as though he did a corrupt act, Sir.”

Sylvestre responded, “Certainly, I do appreciate the point that it is being said that there is a recording, and how will you be able to overcome that hurdle, but as I always say, there are evidentiary procedural rules and on appeal, we will take certain points as it relate to how the evidence was actually stored and whether it ought to have been admitted to evidence, if at all.”

DPP Vidal said after the hearing, “It seems to me that the defense tried, from the outset, to downplay the significance of the matter because this is a matter of great importance, not just to the Crown, but to the criminal justice system. Even though Orlando Vera is called as a witness for the prosecution, the fact is that he is an expert. He is an independent person who is coming to give his opinion in his area of expertise in relation to items that have been submitted to him.

“When you have the opinion of an expert, you’re supposed to be able to rely on it, trust it, and act on it. And when you find out that the person who is rendering that opinion, not because of incompetence, not because of a lack of knowledge, but because of dishonesty and deception is prepared to provide a false result, that is a terrible, terrible state of affairs; the landscape, in which we prosecute at the moment, is an extremely difficult landscape. We are always fighting with the police, during investigations.

“We are fighting with witnesses, because they don’t want to testify. Sometimes, we’re fighting with the Bench, as well. And, to think that the people in the system who are supposed to be neutral, must it also be that we can’t trust them? Then, where do we turn to get justice?”

DPP Vidal added, “We are satisfied with the sentence. We are satisfied that it was a custodial sentence, because I think that the seriousness of this type of offense has to be marked. This is an expert, a person who tremendous resources have gone into training, so that the criminal justice system can be bettered, and this is the conduct that he is engaging in. I think it required a custodial sentence.”