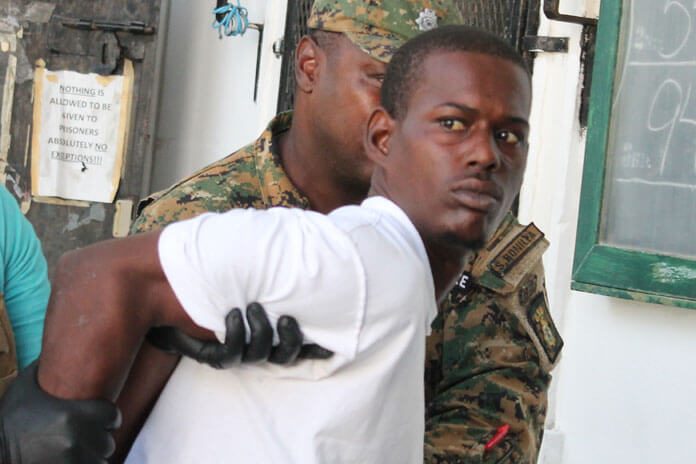 BELIZE CITY, Tues. Jan. 14, 2020– Today, while several hecklers were on the street waiting to see and berate him, two members of the GSU practically dragged Kenrick Longsworth, 27, from the holding cell into the Magistrate’s Court for him to be arraigned by the Chief Magistrate Sharon Fraser for the murder of his 3-year-old stepson.

Apart from murder, Longsworth was charged with 2 counts of grievous harm for injuries he inflicted on his two other stepsons, ages 2 and 4. Chief Magistrate Fraser explained to Longsworth that she would not take a plea from him because the offence of murder is indictable.

She also explained to him that he is not eligible for bail because of the nature of the offence. He was remanded, until March 12.

She told Longsworth that she had received a report that he was “giving trouble” while he was in the holding cell at the Magistrate’s Court.

Longsworth told the Chief Magistrate that the police made him feel uncomfortable by putting him in the cell while he was still wearing handcuffs.

Longsworth, a resident of Lovely Lane, said he is unemployed and when he was asked by the Chief Magistrate how he has been able to sustain himself, he said he took care of the children while their mother went to work.

On the morning of Friday, January 10, Longsworth’s common-law wife went to work and left her children in his care.

When she returned home in the evening, however, she saw that her children were suffering from injuries and the 3-year-old appeared dead. He was pronounced dead on arrival at the Karl Heusner Memorial Hospital (KHMH).

The other children were examined and treated by a doctor who classified their injuries as grievous harm. Apparently, the children had been beaten with a blunt object.

After the incident, Longsworth had gone into hiding at a farm in Isabella Bank. On Sunday, January 12, police found him at the farm and arrested him.

Longsworth’s criminal history shows that he has had several brushes with the law and had been charged with offences that included attempted murder, robbery and aggravated assault.