Kevin Bernard, the PUP’s only surviving mayor, says they beat “the big giant” 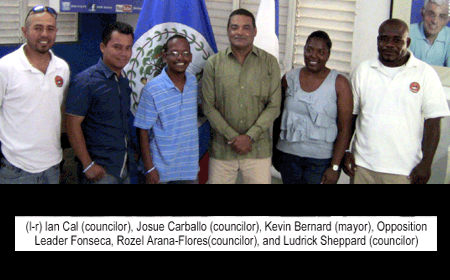 BELIZE CITY, Thurs. Mar. 5, 2015–Kevin Bernard has been elected for a third term on the Orange Walk Town Council—his second consecutive term as mayor of that municipality, where the Opposition People’s United Party (PUP) was able to secure its only victory in the March 4, 2015 municipal elections.

Bernard told Amandala Thursday that it took hard work, commitment and a good team to secure that win.

“I believe that we have shown the people of Orange Walk that we had the ability, that we were able to carry out the work day in, day out, despite the challenges and that is one of the biggest things that I think took us over the hump,” he told us.

Bernard will be leading a mixed council, which includes two elected members of the ruling United Democratic Party; but he is no stranger to mixed councils. In fact, Bernard was one of three PUP councilors elected to serve in that municipality back in 2009, when the UDP held the majority of seats in Orange Walk.

In fact, it’s almost déjà vu, since those were the only seats held by the PUP back in 2009, just as the Orange Walk seats were the only seats the PUP were able to garner in the most recent elections, having lost 16 seats in Dangriga, Punta Gorda, Belmopan and San Pedro.

At a press conference held Thursday, Opposition Leader Francis Fonseca alleged that the ruling party used PetroCaribe funds to finance its election campaign. Bernard also told us that money was “the big giant” in the municipal election.

“And we know that we faced big giants: we faced a lot of money, but we are able to beat the money – we were able to beat the giant. And so I am very pleased with the result and while we did not win the full seven, we still won the majority and I am prepared to work with anybody. At the end of the day, it is now an Orange Walk Town Council and we need to work,” said Bernard.

The PUP also charged that their “decisive defeat” was partly due to “the prevalent thinking among the electorate that it makes no sense to elect PUP city and town councils in the face of a vindictive UDP central government.”

We asked Bernard what has been the key for the Orange Walk Town Council in striking that balance needed to run an effective local government administration when the central administration in Belmopan is of a different hue.

He told us that they did what they had to without raising taxes on residents of the town. He also said that they created a more enabling environment to promote new businesses, which then broadened the tax base and resulted in more revenue, bolstering what they were able to raise from more targeted tax collection efforts.

According to Bernard, the new council will focus on infrastructure development.