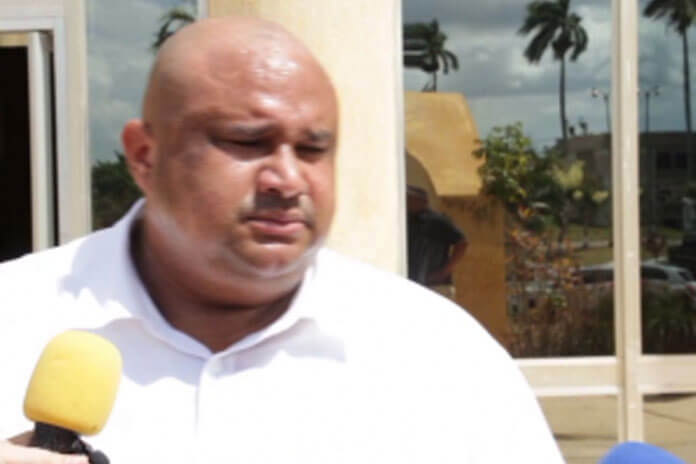 BELIZE CITY, Wed. Mar. 18, 2020– This afternoon, senior officials of the Ministry of National Security held a media briefing at the Belize Coast Guard Headquarters to highlight two of the latest reports about the ill-fated Belize Defence Force (BDF) UH 1H BDF 12 helicopter which crashed, killing 4 BDF soldiers who were on a secret mission involving the interception of a drug plane in the early morning hours of Thursday, February 27.

These two new reports on the helicopter crash, one from the helicopter manufacturer, Bell, and the other from the Belize Civil Aviation Department, come on the heels of the first report that was done by the Honduran Air Force, which pointed to pilot error as the cause of the accident. There are now three completed reports on the crash and other reports are still pending. These include the report from the US Southern Command and the BDF’s own internal investigation.

Attorney General and Minister of National Security, Michael Peyrefitte, who has been chairing the media briefings, remarked that there is essentially nothing new or significant in these two new reports.

“To me, it adds nothing new. There are no surprises in there, but I don’t expect you to trust me, so you can read it for yourself when we post it online,” Peyrefitte said.

“Well, they don’t get into that directly; essentially; they just analyzed the aircraft,” Peyrefitte said.

“Are there any ballistic reports, anything that indicates any activity with gunfire?” he was further asked.

Peyrefitte replied, “You mean the new reports? No, no, currently, the report remains saying that there is no evidence of any gunshot to the mainframe, or other parts of the aircraft. A full autopsy was done with photographs and everything, and there was no sign of any harm by any firearm or anything of that effect. The autopsy report, naturally, we have given the family the opportunity to view it, or have it if they want, but naturally, what they do with it is their choice, and it is not the position of the government to release it to the public. We don’t want those pictures circulating on Facebook, to be honest with you.”

“The Honduran report found that the engine was energized at the point of contact, or that was their conclusion? What has BELL concluded about the function of the engine?” questioned one journalist.

“Well, I haven’t seen anything differently that they have concluded,” Peyrefitte said.

“So, it wasn’t a mechanical failure?” he was further asked.

“Right, it wasn’t a mechanical failure. They didn’t indicate that there was anything wrong with the helicopter, per se, except that it crashed, but before that, there is no indication from their report,” Peyrefitte explained.

“Is there any indication, from any of the reports, as to why it was going full speed, or if that is what normally happens?” Peyrefitte was then asked.

“Well, as they said in their report, the Hondurans, essentially, they talk about a spatial disorientation or mis-orientation, or what have you. But you would have to interpret that to me. But given that the aircraft was going on a right turn downward at a thousand feet per minute before it hit the water, based on the damage to the aircraft or how they interpret it, in their view, in one of their theories, it could be that since there is no other damage to anything that would indicate otherwise, the pilot in command wasn’t fully aware of how high he was or how low he was, and when he made that bank, he wasn’t aware that he was much lower than he thought he was. We have to assume that the pilot in command didn’t purposely put the aircraft in the water, and so we have to believe that is possible that based on their report, one of the issues could have been the spatial disorientation,” Peyrefitte replied.

Peyrefitte was then asked about the time at which the drug plane landed and where was the helicopter when it landed.

The Minister of National Security said that they could not answer that question.

It is reasonable to conclude that the helicopter was not present when the drug plane landed, because evidence points to the fact that the helicopter crashed shortly after it had left to go on the mission. That was perhaps why it was missing for more than 24 hours before it was discovered that it had not returned to base.

The time when the drug plane landed and the whereabouts of the helicopter appear to be of significance in unraveling the mystery of the accident, but the Ministry of National Security was tight-lipped about that timing when they were asked about it today.

According to the time sequence, the Gulfstream jet landed at approximately 4:05 a.m., Commissioner of Police Chester Williams said at a press conference dealing with the interception of the plane and its cargo.

BDF 12 took off from its base at 4:07 a.m. This would suggest that the plane was already on the ground when the helicopter lifted off and went to the area. There was no mention; however, that BDF 12 was a part of the operations.

Neither did anyone from the Ministry of National Security confirm that the helicopter was seen hovering over the landing area of the drug plane. The only mention of an aircraft was a reference to a “foreign air asset” that was provided in the interception of the Gulfstream by “a friendly neighbor.”

Perhaps the helicopter played no role in the interception of the drug plane because it may have already crashed in the water shortly after 4:27 a.m., after its last communication was received.

The Belize Civil Aviation Department report placed heavy reliance on the Honduran report, which it quoted from exhaustively, and said at the beginning of its “preliminary report” that it accepted the report.

Finally, there has not been a rational explanation from authorities as to why the helicopter had two pilots and two engineers for its secret anti-narcotic mission, and why were the two most senior in command of the Air Wing — the pilots, and the BDF’s two best engineers— on the helicopter at the same time.