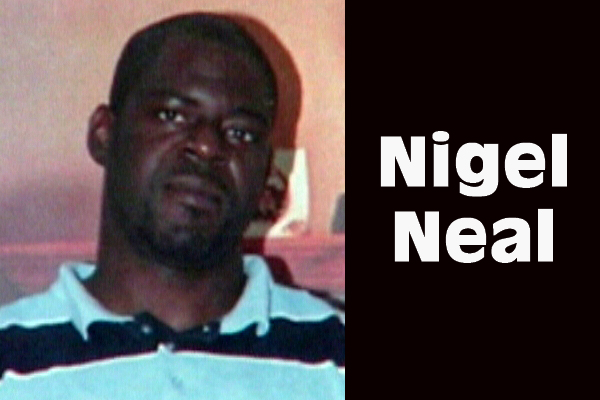 When he fell after the first shot, the gunman stood over him and shot him six more times

A resident of Roaring Creek, who had been receiving death threats, was shot execution-style in his yard at about 8:30 this morning.

Nigel Neal, 34, had just arrived in his yard and was going into his family’s house when a gunman, who apparently had been waiting in the yard, shot him. When Neal fell, the killer stood over him and fired about six more shots into his body, chest and face.

Witnesses who were in the area and saw what happened said that the gunman then ran out of the yard, met another man, and both ran across the village’s nearby football field, and escaped.

Police, who launched a quick investigation, detained two men who matched the description of the men that was given by the witnesses.

Alice Burgess, Neal’s mother, told reporters that she was at the Belmopan temporary market at the Agricultural and Trade Show grounds in Belmopan, when her eldest son came to find her and reported that Nigel had been shot.

She quickly went back to Roaring Creek to her home, and she saw her son lying on the ground in the yard. He had been covered with a sheet by policemen who were in her yard, but she saw his face, which was full of blood.

The sight of her fallen son was too much for her to bear, she said, and she almost collapsed and began to cry.

The grieving mother told reporters that her son had been receiving death threats that were related to a robbery and murder that occurred in April of this year. She strongly believes that the men who had been threatening her son were responsible for his death. She said that Neal had constantly been receiving the threatening messages, warning him that he would be killed, and that he was not liked in the village.

Neal, however, had knelt down before her, swearing to God that he did not know anything about the murder to which the death threats were supposedly related.

Burgess said that she will miss her son very much, because he had stopped engaging in troublesome activities for several years, and used to cook for her when she was not feeling well.

Assistant Superintendent Sinquest Martinez, commander of Belmopan police, said that Neal became known to them after being deported from the United States and having run-ins with police.

Another witness told police that about 6:00 this morning, she saw Nigel Neal at the Belmopan junction and he asked her to give him a ride into Belmopan to go and sign in. He said that he was fearful of walking because he heard that there was a hit out on him, because of a murder that occurred in Roaring Creek.

She took him into Belmopan and shortly after, she heard that he had been killed.