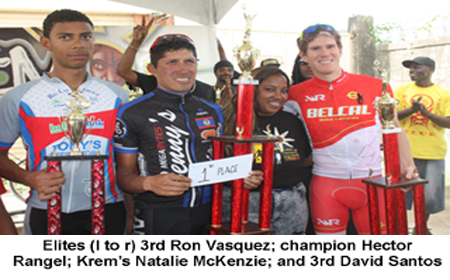 BELIZE CITY–After a three-year stretch of Belizean born champions, a foreigner, Mexican Hector Rangel, a Masters rider (over 35 years old) riding for the Belizean team, Benny’s Megabytes, came in all alone, after sweeping the bulk of the station prizes, to claim the Elite crown for the 25th KREM New Year’s Day Cycling Classic.

As deflated as many fans were when it was learned that a foreigner had taken over the Elite race, it was jubilation for many when a lone female, Alicia Thompson of Belize City (Belize Bank Swoosh) came into view across the Belcan Bridge and rode in all alone to gain her second Female championship of the KREM Classic (She won it also in 2006.). Reports indicated that a spill had occurred somewhere near the middle of the female race, which started out from Orange Walk Town, and Alicia took the opportunity to put some distance between herself and the other 6 female cyclists, including defending champion Shalini Zabaneh, who was injured in the spill. And they never caught her. It was the 15th running of the Female KREM Classic, and Alicia did the 52 mile ride in 2:58:04. 2nd was Kaya Cattouse (C-Ray Cycling, 2:59:27); 3rd Patricia Chavarria (BECOL, 2:59:27); 4th Gabrielle Lovell (Digicell-4G, 3:00:14); 5th Shalini Zabaneh (Sagitun, 3:00:14); and 6th Derlene Martinez (Sagitun, 3:25:54). One other female cyclist, Maricela Garcia (Sagitun), did not finish within the 30 minute time limit after the winner.

In its release today giving the final finishing classifications, the Belize Cycling Association congratulated all the winners and wished “a speedy recovery to all those who were involved in racing incidents, particularly Delawn Abraham and Shalini Zabaneh, who were injured.”

The KREM “Big Shilling” is gone into recorded history, and all those names which stood out in this New Year’s Classic will surely be closely watched when the time draws near for the next big cycling event, on Holy Saturday.