KREM Radio rolls out novel initiative for its 25th anniversary 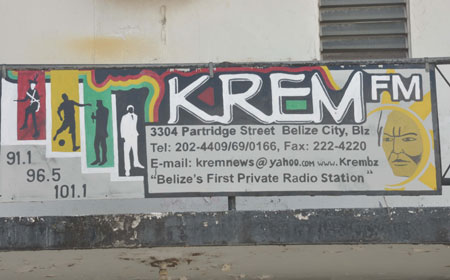 BELIZE CITY–KREM Radio, which has earned the bragging rights as Belize’s first privately owned radio station, has engaged in a wide range of community-based initiatives since its inception in 1989, and this year, for its 25th anniversary, the proprietors are planning an unprecedented initiative which will enable 25 first-time landowners to claim a fraction of the Jewel for themselves.

The popular roots radio station will celebrate a milestone achievement on November 17 of this year, which will mark 25 years of its existence on the airwaves across the length and breadth of the country, and as a show of gratitude to its faithful listeners and fans, the station has an ongoing promotion known as “KREM’s Big Shilling Giveaways,” in which listeners are allowed to call in to the station at intervals during the morning and afternoon programs, and get a chance to win hundreds of dollars in gifts and prizes every week.

Today however, KREM Radio’s Evan “Mose” Hyde informed us that the administrators have made the effort to take the initiative a step further through a second phase of their anniversary promotion, which will be effective tomorrow, Friday, October 3.

He said, “We began our celebrations from the year started, but November 17 for us is going to be a very special day, and we are looking forward to big events that we have planned. There is going to be a big raffle – we had an anonymous donor, a Belizean-American in fact, who felt that he wanted to give back. I think he became aware of the huge land issue and difficulties that we have [in terms of getting a piece of land], and basically gave us about 12.5 acres to give out near Frank’s Eddy Village at Mile 39 on the George Price Highway.”

“This really comes together as a part of our 25 years in radio broadcasting – the first broadcasting network to electronically break the Government monopoly of electronic media in Belize. We got this opportunity to share this gift as a part of our celebrations, and we are going to subdivide the land into 25 lots which will be about 100×170 feet, so we are talking about very large lots, and we will be giving listeners an opportunity to call in from Friday, October 3 until November 17. On that last day, we will choose 25 people who will win those lots, but of course, there’s one condition – you have to be a first time landowner, so we’re really looking to find 25 people who are deserving and who need a lot, and we feel very proud to have been able to partner with this benefactor and to tie it in to our anniversary,” Hyde went on to say.

While the announcement is momentous in itself, Hyde said that the objective of the record giveaway is to highlight the station’s silver jubilee by giving back to the community, especially the “KREMites” who have played a pivotal role in the station’s survival and development during its years of struggle to overcome adversity and maintain its independence.

“I think it’s quite a milestone, and the journey has been one with ups and downs, so I think it’s an important time for us to reflect and be proud of the fact that we are still here. We are cognizant of the many forces and challenges that we have faced, especially with the people who have been with us through this tremendous journey from 1989 until now, such as our listeners”, he mentioned.

Hyde affirmed that the community’s role has played a substantial part in the very survival of the radio station.

“We’ve gotten significant, direct support at very key spots in our journey. It’s the reason why we are in fact celebrating 25 years, besides the fact that from the community, we have found those talented people who have joined us for this ride [as part of our staff]. But the community has always supported our various initiatives – they’ve been a part of our ride, supporting shows, events, listening, calling in and just really being responsible for that kind of buoyancy that keeps us afloat, and so KREM at 25 is really a lot about people’s support”, he declared.