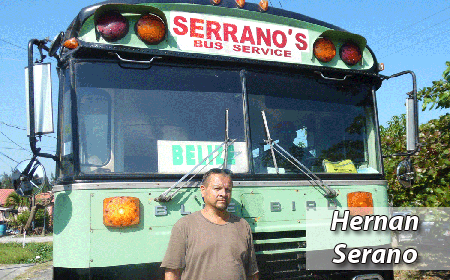 BELIZE CITY, Wed. Feb. 3, 2016–Hernan Serrano has been given a permit since January 15 to operate two buses between Belize City and Ladyville; his two buses don’t go all the way to Lord’s Bank as do the other bus lines, Haylock Bus Service and Ramos Bus Service, however.

Serrano’s Bus Service run is apparently very much welcomed by the residents of Ladyville, who said that prior to the Serrano runs their needs were not being met.

Amandala spoke with a few of the passengers; a man who was on crutches said, “This is the transport I use now,” and noted that it is very convenient, since the villagers don’t have to walk to the highway to wait for a bus.

Another passenger told Amandala that having another bus on the road alleviates the congestion (which necessitates that a lot of passengers be standees) that occurs on the buses, and this new run allows them to ride “comfortably”.

While another passenger explained the route, she said, “Unlike the other runs, which just leave us on the highway, Serrano’s Bus Service goes into Ladyville from the highway; it takes Poinsetta Avenue, Woodpecker Avenue, Manta Ray Blvd., Perez Road, Mirage Road and Milpa Road, which is the last part of an area called Japan.”

The chairman of the Ladyville Village Council, Albert Magdaleno, told Amandala, “Serrano’s Bus Service provides a service to the community that is well appreciated by residents of Ladyville, such as students, parents and people in general, since his service takes them right in front of their homes, so it is convenient for them.”

Meanwhile, the other buses leave the residents of Ladyville on the roadside, requiring many of them to walk quite a distance, Magdaleno said. He added that residents would like to see Serrano’s run continue.

However, while it appears that many of the residents are pleased with the new run, the other bus companies are not happy at all, so much so that they sought the services of Barrow & Company.

A letter from Barrow & Company stated, “There is no statutory authority in the Chief Transport Office or indeed the Transport Board to grant any temporary permit to operate buses on roads in Belize for hire or reward. Mr. Serrano is accordingly operating his buses on the road unlawfully with the approval of the Department of Transport.”

Former Commissioner of Police and now Commissioner of Transport, Crispin Jeffries, told Amandala, however, “He (Serrano) has a road service permit and there is nothing illegal about his run.”