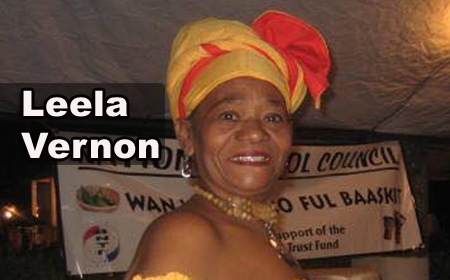 BELIZE CITY, Sun. Feb. 19, 2017–Belizean icon and “Brukdown Queen,” Leela Vernon, 66, passed away at around 9 a.m. on Sunday. According to her relatives, the Punta Gorda native had been hospitalized last Thursday for kidney complications, but died instead of cardiac arrest.

A relative of Vernon told our newspaper on Sunday that Vernon had awakened from a coma on Friday and had been speaking fluently to loved ones about the Creole culture.

Vernon has given many decades of her life to the preservation of the Creole culture and her widely known and performed song, ”Ah Wah Know Who Seh Kriol Noh Gat No Kulcha,” best represents her lifelong efforts.

However, she was known for many other songs for which she has received numerous awards, including her Creole translation of the country’s national anthem.

Her passing has caused an outpour from the nation’s artistic community.

On Sunday, artist Katie Usher posted to her Facebook page, “…Here is an artist, a woman at that, who fought to keep culture alive, relevant, active. Who will take up the torch? Your energy was radiant! Your dress and manner regal! You are missed already, but your legacy is here forever. Rest in power. Condolences to your family and friends.”

Music producer and musician, Ivan Duran, who founded and serves as director of Stonetree Records, also posted to his Facebook page, “Always loved her courage and determination, my deepest respect to the Belizean Queen of Brukdown.”

Prophet Jorge Ernesto Babb of the Association of Belizean Artists posted to his Facebook page, “Congratulations to Lady Leela Vernon MBE, ‘Kriol’ Cultural Educator, Cofounder First Creole Council Of Belize and National Kriol Council of Belize, Founder Ebolite Dance and Drama Company, Singer, Songwriter, National and International Entertainer on her ‘Lifetime Achievement Award’ awarded to her by NICH Belize. (March 2016). We at The Association for Belizean Artist awarded Lady Leela Vernon at Belize Sound Fest. Today we all Send Our Sympathy to Her Family…”

Artist Tanya Carter posted to her Facebook page, “Dear Leelah, you taught me how to be a boss, a leader and proud to be a creole. You are an icon. A Creole pioneer. A rare Belizean gem. D boss of all bosses. D lady Weh dare seh, ‘I waan know who seh creole noh got no culture.’ D lady Weh Neva ramp with mista peetas, hits fi hits! U Teech mi that I can be just as big or bigger than the boys in the music business, n that’s just what i try to do!” The host of KREM’s WUB morning show, Evan “Mose” Hyde, during his show today, Monday, reminded the nation that, “Leela was no cupcake. She wa tell yuh about the rights of poor people, the rights of black people… she nuh sitdown and she nuh keep fi she mouth zipped… Miss Leela was a force…”

Gerald Rhaburn, well known as Lord Rhaburn, the nation’s leading Calypsonian, during the KREM WUB show reflected on his favorite songs from Vernon. He said his favourite two were: “Ah Wah Know Who Seh Kriol Noh Gat No Kulcha,” and “Two Creole Man.” According to Lord Rhaburn, these songs were of, “real composition with value and roots.”

Leela Vernon was a founding member of the National Kriol Council. In 2004, she was named as the Brukdown Artist of the Year and in 2011 she was the recipient of the Woman of the Year in Culture Award.

She leaves behind 7 siblings, 5 children and 8 grandchildren.