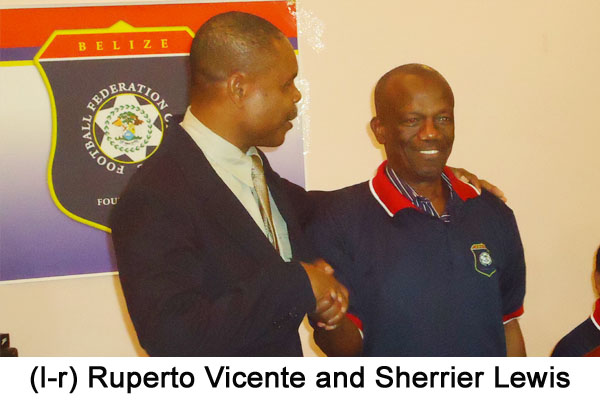 Belize has left itself little time to prepare a full-strength National “A” side to attend next January’s UNCAF Copa Centroamericana to be held in Costa Rica.

But the Football Federation of Belize (FFB) today unveiled its most important weapon in the arsenal for a team on the rise in the region: new national team coach and head of coaching training, Costa Rican Leroy Sherrier Lewis.

Lewis previously acted as head coach and technical director for Belize in 2001, and authored one of Belize’s best runs to date at the regional level in what was then known as the Nation’s Cup, and subsequent World Cup qualifiers. Unfortunately, he was run out by the former FFB administration under Dr. Bertie Chimilio, and Belize’s record under his successors until recently was mediocre at best and desperately poor at worst.

As the FFB fought with the Government and its detractors at home, Guatemala’s Palmiro Salas and Honduras’ Jose de la Paz “Chelato” Ucles led the national side to important victories against St. Kitts and Nevis, Montserrat, Grenada and St. Vincent – admittedly smaller Caribbean sides – while the team gave good account of themselves in matchups with mighty Mexico (lost 9-0 over two legs in the second round of the 2010 World Cup qualifiers played in 2008) and nemesis Guatemala (lost by a combined score of 5-2 in two group matches in the 2014 World Cup qualifiers played in 2011). But in the Nations’ Cup, the qualifying tournament for CONCACAF’s Gold Cup, Belize has never had so much as a victory despite appearing since 1996.

Now under new management, the FFB and Lewis are looking forward to a continued run of success.

Working with Lewis are his assistants, Belizean Charlie Slusher, goalkeeping coach Kent Gabourel and technical director Renan Couoh. A physiotherapist, physical trainer and other coaches are yet to be named.

Lewis is a former national champion as a striker/winger with Costa Rican giants Liga Deportiva Alajuelense and later coached that team and others in Costa Rica and Honduras and most recently was a soccer consultant in New York.

Lewis insisted in his remarks to the press that Belize has the talent to do well – we just need to work together. He said that his house would be open to all suggestions, and declared that the players are what is most important – not the officials, the press, or anyone else – and while he does want to work with the clubs, his priority is one team – Team Belize.

Later, Lewis told Amandala that while he is partial to attacking football as a former striker, he does see the need for balance on the team, and the development of a preferred system will come after he takes a look at the local players to be selected after multiple tryouts to be held all over the country, starting this Saturday at the People’s Stadium in Orange Walk Town.

Tryouts will take place all this month and, starting in November, the provisional 25-man roster and another replacement 25-man roster will be named, and a series of at least 8 friendly matches will be lined up with other nations and teams in December and January.

And Lewis made clear what his aim is, when talking about how far Belize can go: “No businessman will come to Belize to see a game – but they’re going to see the Nations’ Cup; they’re going to see the Gold Cup; that’s where they will go to see the players. Another thing I want, from today on, in the mind, heart and soul of every one of us – the Gold Cup is our aim…we want to make history. If we make history, I think that it would be easier for us to go ahead and change our plans, make plans for the future…”